Teach Your Puppy to Play 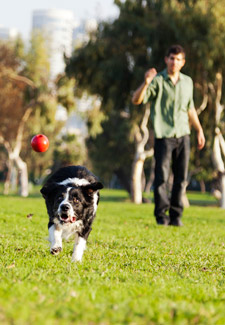 A dog’s individual personality is often reflected in the type of play he prefers.These preferences can be breed-specific (Labradors and Golden Retrievers, for example, are bred to fetch), but often it comes down to the individual dog. While your puppy may express an early preference for certain types of play, his socialization period is the ideal time to teach him to play a variety of games.

Play is essential for a dog’s mental and physical well-being, and is an important way for him to communicate with other animals and people. Play is also useful as a reward for wanted behavior. Playing a variety of different games with your puppy encourages his development.

Dogs enjoy games that channel their natural urges. Playing these games with your dog allows him to burn off extra energy and can help prevent behavior issues associated with boredom.

Tug: Almost all dogs enjoy a good game of tug, although intensity level may vary widely. To eliminate the dangerous and destructive aspects of tug, play this game only with a designated toy. This will help avoid incidents with tugging on inappropriate items like clothing or children’s toys. Ropes with knots on each end are appropriate tug toys because they are different from other items commonly seen by dogs and are easily grasped during play.

Fetch: Most dogs will follow a thrown toy, but it’s a challenge for many dogs to carry it all the way back to an owner. While this behavior is innate in some breeds, almost any dog, including an older dog, can be taught to play fetch. Many dogs prefer to fetch only specific items (tennis balls, for example), but introducing fetch to puppies with a variety of items, including stuffed or rubber toys and Frisbees, opens up a world of spontaneous games. But avoid sticks, as sharp edges can injure the inside of your dog's mouth, and pieces can break off and serve as choking hazards, or lead to digestive tract obstructions.

Chase: The desire to follow and chase moving objects is inborn in many dogs. Beyond running after the ball in a game of fetch, there are other ways to satisfy chase play. My favorite dog toy is called a Chase-It. The toy looks like a fishing pole with a stuffed animal on the end. The toy can be moved around quickly, naturally inciting the dog’s desire to chase. Even the least toy-driven dogs have been gaga over this toy. The Longshot toy, Chuckit! ball launcher and other long-distance throwing toys are other ways to encourage chase play in a dog.

Play With a Purpose

Some forms of doggie play may not look like play, but they still satisfy important urges for your pooch. The right toys are key to these types of play.

Puzzles: Canine Einsteins enjoy games that employ brain rather than brawn. Food puzzles are designed to simultaneously challenge your dog’s problem-solving skills and encourage physical movement to get the food out of the container. This is a great way to combine meal time and playtime.

Chewers: Teething puppies and adult dogs who enjoy chewing prefer toys that feel good on their teeth and occupy time to counteract boredom. “De-stuffer” dogs, who pull squeakers or stuffing out of toys, enjoy toys that can be destroyed, employing their natural instinct to dissect their prey. When choosing chew toys, be sure to choose substantial toys that cannot be torn to bits (such as those made of hard rubber), and remove stuffed toys and any small pieces before your dog ingests them. Avoid toys with buttons and other decorative pieces that can be inadvertently swallowed.