Teaching My Cat to Love My Husband — Step 1 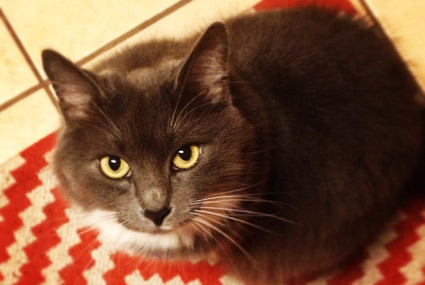 Credit: Kristen Seymour
Trixie is friendly as can be with some people (like the neighbor kids, family members, random strangers who she meets for the first time), but when it comes to Jared, she's only shows affection when there's food involved.

The moment he reaches toward her, she's off like a shot — she's not violent or aggressive about it, but she's definitely not interested in letting him touch her. It's not because he's a man, because she's affectionate with my father and with many of our male friends. And it's not because he does anything to antagonize her (at least, not consciously). She rubs up on him a little when she's on her cat tower and he's putting food in her bowl, but, otherwise, she typically wants nothing to do with him.

Honestly, it's heartbreaking. The person who wanted to love this cat more than anything in the world has been rebuffed again and again. We went through all the things we knew to do — having him be the one to feed her and give her special treats, only trying to pet her when she's the one making the approach — but none of it has gotten Trixie any closer to sitting in Jared's lap.

So we reached out to Vetstreet's resident trainer, Mikkel Becker, for help. In this short series, she'll share her tips and training suggestions, and we'll give them our best shot and report back with frank, honest feedback on what's working — and what's not. We'll also try to assess why certain strategies are more successful than others — things may go just as planned, but it's also possible that Trixie won't respond or we will have trouble following through. We promise to be honest, though, and we're optimistic that with Mikkel's help, Jared and Trixie can finally make friends.

Operation: Teach Trixie to Love Jared is already underway. At Mikkel's suggestion, we've started by making some simple changes to our routine, including throwing mini "cat parties" with all of Trixie's favorite stuff when Jared is around. Want to know how this is working? Read the next installment here: Teaching My Cat to Love My Husband — Step 2