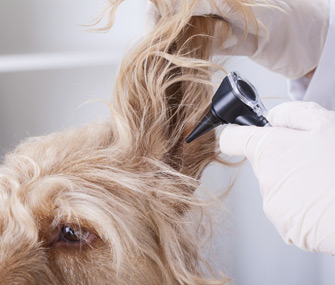 It’s all fun and games until someone ends up in a cone. So say those of us inclined to appropriate T-shirt witticisms whenever the need arises. In my home, the need arose last week when my Slumdog got his eye poked out.

Two dogs were playing, rowdiness ensued, one thing led to another, and next thing I knew, an eyeball was hanging outside its socket. Yes, a real horror show.

Making Do in an Emergency

“Oh, my God,” was the first thing that came to mind. (I may even have yelled it.) Things have a way of moving in slow motion whenever the you-know-what hits the fan—and a dog’s proptosed eye (that’s what we vets call this occurrence) definitely qualifies.

When it happened, it was well after clinic hours, and I was, uncharacteristically, home alone. No boyfriend. No 16-year-old. And, of course, no tech. Just a towel, some sterile lube left over from my kidding (birthing goats) days, plenty of eye meds and some anti-inflammatory pain pills.

It wasn’t exactly the most sophisticated moment of my veterinary career. Slumdog’s eye would live to see the real veterinary me in the morning (when I could anesthetize him for more appropriate treatment).

Though it goes without saying that you should not try this at home, the story turned out well. It’s only been a week, and his eye is no longer painful, bloody or swollen. What’s more, he can already see out of it.

As I was telling someone the story of Slumdog’s ocular escapade (Pugs and other bug-eyed dogs are predisposed to such problems), I realized that other human beings — nonveterinarians, that is — find the details of this account somewhat nauseating.

Veterinarians are often in positions to see incredibly disgusting things. And though Slumdog's eye was definitely the grossest thing that happened to me last week, there were plenty of other nasties I attended in the course of my days.

Consider the four next-most atrocious things I was treated to just last week:

Being a veterinarian can be a dirty job. But somebody’s gotta have a cast-iron stomach.