Home ›
Our Pet Experts ›
The 9 Amazing Abilities of Cats

The 9 Amazing Abilities of Cats 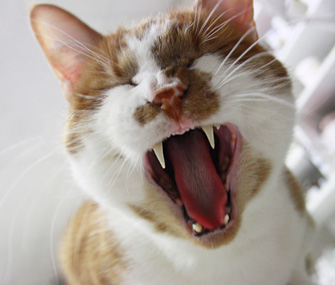 Thinkstock
When was the last time you truly admired your cat's abilities? Her nose, tongue and whiskers all do amazing things.

If you've been lucky enough to share your space with more than one cat, you know how individual each relationship is. But despite their differences in personality, cats possess many common — and incredible —attributes. So the next time your cat takes a flying leap onto a dresser or races around a corner in hot pursuit of your foot, before you shoo him away, take a moment to appreciate your cat's amazing abilities.

1. A highly attuned sense of smell. Cats have a structure in the roof of the mouth called the vomeronasal organ, which enables them essentially to taste what they smell. If your cat sometimes holds his mouth open, he may be exposing scents, such as pheromones, to this organ for processing, in a position called the Flehmen response. Cats also use their nose to identify enemies, mates, people and other cats' territories.

2. Psychic whiskers. A cat's whiskers are thicker than ordinary hairs, have deeper roots andprovide important sensory information. Whiskers are sosensitive that they don't have to touch an object for a cat to sense nearby movement — changes in airflow can be enough. To check for signs of life in prey, cats can rotate the long, rigid whiskers that protrude sideways from the muzzle down. These whiskers also help cats measure tight spaces to decide whether they can fit through. Whisker-like hairs behind the front legs help cats feel their prey, while whiskers above the eyes trigger a blinking reflex to protect the eyes when an object nears the cat.

3. Super-quick feet. Some cat breeds can reach speeds of about 30 miles per hour over short distances. The cat's back legs support much of his body when he jumps. You've probably laughed more than once when, just before your cat pounces, his rear legs shimmy and his rear end starts to wiggle. This is how your cat sizes up a jump and tests the firmness of takeoff.

4. Balancing tail. Besides helping humans and other cats judge your cat's mood, his tail helps him balance himself when climbing a tree or precariously perching on the back of your sofa. The tail also helps cats to maintain their balance when making a sharp turn in pursuit of an invading bug or a catnip mouse.

5. Extraordinary hearing. Little does the squeaky mouse tiptoeing through your house know that he is broadcasting his position with each step. Your cat's cone-shaped ears can pick up sounds and movements up to five times farther than humans can, which helps him pinpoint the exact location of the source.

6. Far-sighted focus. You may have noticed that your feline friend typically does not see a piece of kibble on the floor right under his nose or that he paws the water in the bowl before drinking. This is because cats have a hard time focusing their eyes on close, unmoving objects — they're much better at seeing movement and objects that are farther away. Cats often paw water before drinking to determine where the surface is, as well as the speed at which the water is flowing and if there is any danger under the surface (unlikely in a water bowl safely positioned inside your home, however).

7. Tough tongue. If you're a cat owner, you're probably familiar with the rather uncomfortable sensation of your cat's tongue dragging across your skin as he licks you. But do you know why his tongue feels so much like coarse sandpaper? Papillae, or small, backward-pointing projections on the surface of the cat's tongue, actually contain keratin, the tough substance that is also found in human fingernails. These abrasive projections, which allow a cat's tongue to act like a comb, are an essential tool in untangling fur during grooming. Licking his coat also helps relieve anxiety, fear and nervousness, which explains why your cat vigorously grooms himself following a spat with another cat or a missed landing after a jump.

8. Feline flexibility. The cat's tongue would not be as useful for grooming without his spine's amazing flexibility, which allows a cat to groom nearly his entire body. Frequent standing, arching and stretching help keep the cat's 30 spinal vertebrae (not including the vertebrae in the tail) pliable and resilient. The tiny shoulder blades permit a wide range of movement, and the narrow chest and lack of a true collarbone allow your cat to squeeze through tight spaces.

9. Powerful paws. The outer layer of skin on the paw pads is considerably thicker than the skin elsewhere on the body. The large pad on the back of the front paw often serves as a brake after leaping forward. That pad and the other rounded pads on the paws below the toe bones cushion movement and are prime shock absorbers when landing.