The Allergic Veterinarian Will See You Now 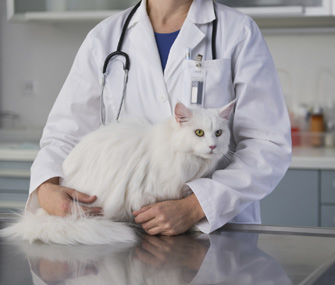 Thinkstock
Dr. Patty Khuly is allergic to cats, be she doesn't let that stop her from treating them.

Ever hear people explain their aversion to cats with the allergy defense? I do all the time. Mostly it's dog owners who assume that any thinking person allergic to cats should respond with repugnance to the entire species. Not so much in my case — or in the case of plenty of veterinarians whose allergies to pets dog them daily.

It’s true. All my life I’ve suffered from severe hay fever-like symptoms in the presence of cat dander. I have to be careful not to touch my face with my hands lest my eyes swell unattractively midexam. Even so, my allergies are sometimes so terrible, I have to leave an exam room during a sneezing, itchy-eye fit. And surgery can turn into a two-pair-of-gloves and two-mask adventure should my eyes and nose run uncontrollably.

A Common Condition Among Vets

The interesting thing is that my allergies to cat proteins found in dander (dead flakes of skin), saliva or urine used to be way worse. I was wedded to every manner of allergy medication to help me live my life as a pet owner — let alone a veterinarian — without dissolving in a puddle of tears and snot (pretty, right?). In fact, my symptoms became so debilitating that I even considered a career change.

Thankfully, a miracle of the unfathomable human immune system intervened, and my allergies subsided right around the time my son was born. Otherwise, I’m fairly certain I would have spent most of my adult life working around “greater” creatures.

Lest you think it strange for someone to knowingly choose a career that dooms her to physical discomfort, let me assure you it’s more common than you might think. A surprising number of veterinarians suffer from allergies to pets. Indeed, the incidence of pet allergies among veterinarians I know seems to mirror the reported one-in-10 figure we see in the wider human population.

In other words, allergies prove little to no deterrence to those of us sufficiently motivated to pursue a career in veterinary medicine. (Advanced mathematics on the other hand...)

Not a Barrier to Helping Animals

So when I hear young people lament their inability to enter the veterinary field as a result of their animal allergies, I urge them to reconsider. If their allergies aren’t too severe, I tell them, it can still be a reality for them. After all, most veterinarians aren’t allergic to all species.

What’s more, even if they never end up handling animals directly, anyone with veterinary training will always have unique knowledge that can be used outside of general practice to help improve the lives of animals (and their people) — often to greater effect than those of us in traditional practice. Consider jobs in public health, animal nutrition and research, for example.

Ultimately, the ability to further animal health isn't limited by any given individual’s immune system. If someone really wants to work in the veterinary field, they can and will.

Of course, the average Joe may continue to get away with claiming to “hate” cats based on his health concerns. But veterinarians? If they’re like most I know, they won’t let a runny nose or itchy eyes stop them.