Now, they might also even be able to help stem the spread of contagious disease. Auburn’s Waggoner worked on a study where dogs were trained to detect bovine viral diarrhea virus, which can affect a cow’s intestinal system. And while this can help cattle farmers, it also has much larger implications.

“Our whole purpose in doing that was the bigger idea that you could train dogs for detecting viruses and therefore they might be used for different agricultural purposes and also for the detection of people [who might be infected with a contagious virus],” he said. “When we have an outbreak of some type of viral illness in the world and it’s spreading, there’s not a lot of good ways to monitor that and detect it as people cross borders and go from one country to another. You could use dogs potentially in the detection of individuals who may have the virus.”

We all know dogs are good at smelling food, but in this case, we’re not talking about a tasty treat. Instead, canines are helping humans to track down exotic and valuable truffles and fish that have been illegally harvested.

Black truffles grow underground and have only recently been cultivated in the U.S. Some are worth about $1,000 a pound, reports CNN, but they’re not easy to find — unless you’re a dog. The Lagotto Romagnolo, an Italian breed first recognized by the American Kennel Club last year, is probably best known for this capability. 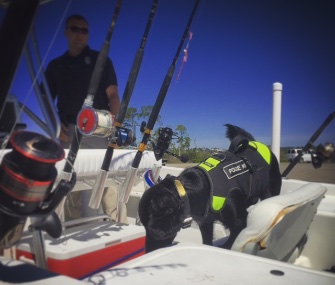 Auburn University
A Spaniel trains to detect hidden fish fillets on a boat in Alabama.

Waggoner hasn’t worked directly on training truffle dogs but explains that they sit to indicate they’ve found a truffle — rather than digging them up to consume them, like the pigs who’ve been used for this purpose.

“The truffles are just something off-limits,” he explains. The dogs will quickly learn that by locating the truffle, they get the thing they “want most in the world,” which is usually a favorite toy, playtime with a person or a food reward.

Waggoner’s team worked with the Alabama Department of Natural Resources this year to train two Spaniels to find hidden fish fillets. “There’s a very short season for red snapper for conservation purposes and it’s a very sought-after fish,” Waggoner explains. The department needed a way to ensure the charter boats and individuals who go out fishing in the area aren’t harvesting the fish out of season and they needed to figure out how to intervene when that was happening.

In this case, the dogs had to be trained not simply to find fish fillets but to indicate when they found them in parts of the boat where fish weren’t normally kept, like down in the hull or at the bottom of an ice chest.

“They’ve been very effective already,” Waggoner says. “They’ve had some finds and certainly the press they’ve gotten down there has helped with curtailing people from trying to harvest these illegal fish out of season.”