The Amazing Ways Dogs Are Helping Kids With Physical Therapy 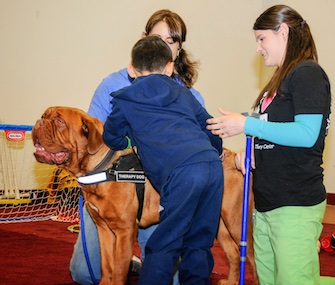 For 8-year-old Johnathan Ingersoll, the physical and occupational therapy he goes through to help with his cerebral palsy and seizures is hard work. But in the last year, he’s gained a big — and sometimes slobbery — partner to assist him in his sessions.

Atlas, a 2-year-old French Mastiff, is a therapy dog who works with the patients at the Children’s Therapy Center in northern Virginia, under the guidance of his handler, Kathy Benner, from the nonprofit Heeling House.

Atlas first started working with Johnathan to help him with standing and walking. Johnathan usually uses a wheelchair to get around the center, but he’s able to walk down the hallway while holding on to Atlas’s harness. The pair quickly developed a good rapport, and Benner has been bringing Atlas in weekly to help Johnathan with other issues, including improving his memory and reciprocal communication through games they play together.

“Johnathan is like a whole different person when Atlas is there. He’s very focused, and he’s just very motivated to do things that he normally isn’t motivated to do,” says his mother, Jen Ingersoll. “Atlas changes his whole outlook on therapy.” 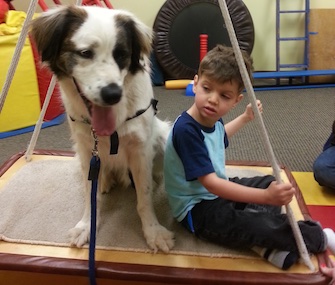 Benner, who has a background in animal training, approached the Children’s Therapy Center about voluntarily bringing in her therapy dogs to work with the kids.

The dogs — two who belong to Benner and three others who she handles — have therapy dog certifications through Pet Partners. Benner then continued to train them, first on interacting with kids and then on more specific behaviors that are unique to the work they do. “Especially when you’re working with children and dogs, safety is the number one thing,” she says.

Benner is always in the room with the dog during a session, and works closely with the therapists to create a plan to help the patients reach their goals.

The dogs she brings in have different strengths and personalities, and they are carefully matched to the child. The child then works with the same dog each time — whether that’s weekly, biweekly or monthly.

Ingersoll also has an 8-year-old daughter who gets therapy at the center, for high-level communication and sensory issues. But Catherine is paired with a 5-year-old Labrador Retriever.

“She’s very quiet, so she works with Hobbes, who’s a very high-energy dog,” Ingersoll says. “They’re a good match because he kind of peps her up, where Atlas kind of chills Johnathan out.”