Home ›
Our Pet Experts ›
Dr. Ann Hohenhaus ›
The Dieting Dog: Cookies Don’t Count If No One Sees You Eat Them

The Dieting Dog: Cookies Don’t Count If No One Sees You Eat Them 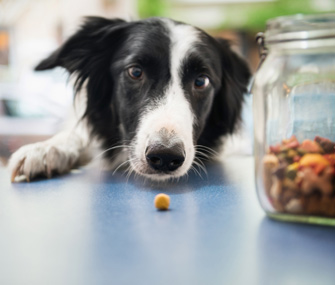 On a daily basis, I see dog and cat patients who are overweight or obese.Research has shown that many pet owners don’t recognize this serious nutritional disorder in their favorite fur person. One of my jobs as a veterinarian is to ensure pets are as healthy as possible and, in the case of a porky Pug or flabby feline, to determine why the pet has packed on those extra pounds.

At a recent conference I attended in my hometown of New York City, veterinarians like me, as well as human health care professionals, were given a fascinating glimpse into the intersection between human and veterinary medicine. The conference, Zoobiquity 3, is based on a New York Times best-seller by the same name that looks at ways to bring veterinarians and physicians together in order to talk about diseases they treat in different species. During the morning’s fascinating presentations, which covered topics including breast cancer, dementia and Lyme disease, a veterinary nutritionist, Dr. Lisa Freeman, and Dr. Evelyn Attia, a physician specialist in eating disorders, discussed the similarities between binge eating in dogs and in humans.

Dr. Freeman’s presentation included an important lesson about food and feeding for all pet owners; she discussed the case of Lucy, a 44-pound Beagle. Yes, you read that right: Lucy weighed twice the expected weight for a member of the long-eared, tri-colored Beagle breed. Lucy’s family knew she was obese, but they couldn’t figure out why. They said they only fed her half a cup of diet dog food twice a day. Where could Lucy’s love handles be coming from, they wondered?

Sleuthing out the sources of extra calories in an obese pet’s diet requires detective-like skills in a veterinary nutritionist. Given the small amount of food Lucy was being fed, it was clear she had more than one source of extra calories in her daily fare. Suspicion immediately fell on what other kinds of goodies Lucy might be scoring. Treats, for example, are notoriously high in calories and very easily handed out to a dog with hopeful brown Beagle eyes and a wagging tail. Treats are not exclusively doled out by family members either, but can also come from a well-meaning delivery man, a bank teller or the nice clerk at the drive-through pharmacy. These were found to be a problem for Lucy.

Other pets in the household can also be a source of additional calories. Some investigation found that for Lucy, the cat’s food was a special delicacy. It turns out that people food — dropped from the high chair or offered as a reward for “giving paw” — added an additional caloric load for our zaftig Beagle. Lucy had a touch of arthritis and twice a day willingly took her medicine — but in a spoonful of calorie-laden peanut butter.

Finally, like some humans with eating disorders, Lucy was a binger. She would periodically consume an entire loaf of bread while her family slept.