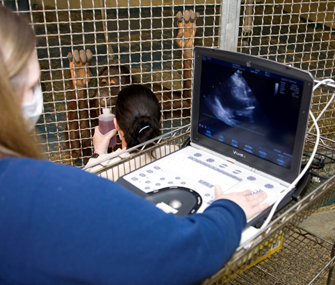 Courtesy of Zoo Atlanta
A technician performs an echocardiogram on an orangutan at Zoo Atlanta.

Q. When did you launch the Great Ape Heart Project?

A. "A little over 10 years ago, I started the Gorilla Cardiac Project with a human cardiologist, Dr. Ilana Kutinsky. We can't say a heart is diseased or abnormal until we know what normal is for an animal of that size and age. We were using humans as a reference — looking at a gorilla heart and comparing it to a human heart — but we weren't sure that was accurate. So the first thing that we had to do was get enough gorillas studied to come up with reference ranges for what was normal and abnormal. That was a big first step — it sounds so basic, but it really had never been done."

Q. Did you find that gorilla hearts were different from human hearts?

A. "There wasn't a huge difference, but there was enough of a difference that we don't use human reference ranges anymore. Their hearts are generally a little bit bigger than you would expect — by bigger, I mean thicker walls — and their heart pumps a lot harder normally. Their function is more like athlete hearts, so you can't use a couch-potato human heart as a standard because gorilla hearts function normally at a much higher performance rate."

Q. What about other great ape species?

A. "There are a lot of published reports for laboratory chimpanzees, but that's not so much true for the zoo population, and we don't want to make assumptions. So, right now, we're looking at the zoo population to see if they have the same heart disease prevalence that we see in research colonies. Dr. Vickie Clyde at the Milwaukee County Zoo is the champion of bonobo heart disease, and she has just submitted a paper for publication on their reference ranges. Orangutans, unfortunately, are a bit further behind, but I think they're going to be where they need to be a lot quicker because we know what needs to be done. So it's really exciting that we're on the precipice of looking at all four of the great apes at one time."

Q. Speaking of orangutans, you had a milestone in February, when your zoo was the first facility to perform an awake echocardiogram on an orangutan.

A. "We're very proud of that. It's a species that no one was sure we could do it on because of their body shape, but we have gotten images, and we're really excited about that."