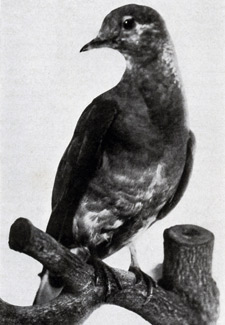 Alamy
Martha the passenger pigeon died 100 years ago at the Cincinnati Zoo.

September 1 is an anniversary with a sad distinction. When Martha the passenger pigeon died at the Cincinnati Zoo 100 years ago, it was one of the few times that the extinction of a species could be pinpointed to a precise day.

There are many lessons in the story of the passenger pigeon, but perhaps the most sobering one is how the species went so quickly from almost unimaginable abundance to nothing.

"A message that people who love animals should take away is that even if something is common, unless we're good stewards, we can lose it," says Joel Greenberg, author of A Feathered River Across the Sky: the Passenger Pigeon’s Flight to Extinction.

At one time, the passenger pigeon was the most numerous bird in its native eastern North America. It was not closely related to the rock pigeon that spread with European colonization and lives throughout the cities of the world, nor to the familiar species it most closely resembles. Greenberg says that it looked like "a mourning dove on steroids" —about a third larger and more brightly colored. And what made it most noticeably different was its habit of congregating in huge numbers during migration and breeding seasons.

"John James Audubon, America's best-known student of birds, lived in Henderson, Kentucky, for a while," he says, "and made a trip to Louisville over the course of three days. He said the birds eclipsed the sun for the duration."

Audubon's story was far from unique. Greenberg says there are numerous records of the huge flights:"For 300 years, people writing in five or six different languages that I am aware ofdescribed periods where over major cities — Chicago, Philadelphia, New York, St. Louis, Columbus — the sky would be dark for hours at a time."

So it's all the more shocking how quickly the species disappeared. Scholars have concluded from a written description that a flock near Toronto may have exceeded 2 billion birds in the 1860s. And then, Greenberg says, "Forty years later, in the spring of 1902 in Laurel, Indiana, the last wild bird was shot that weknow of with certainty."

Their Path to Extinction

How did it happen? The large numbers of birds in one place could be a nuisance, and farmers did sometimes kill them to protect crops, but the real problem was that they were hunted commercially for food — helped along by modern technology.

"What really drove them to extinction was they became a commodity," Greenberg says. "With the expansion of the railroad, wherever birds were killed, they could be sent to the burgeoning markets of the Midwest and East." And the telegraph allowed people who saw the pigeons to disseminate their location widely and quickly.These innovations created an industry: hunters whose business was following the birds from place to place all year long.

Habitat loss probably also played a role in making the birds easier to find, since there were fewer places for them to nest. And because they bred slowly, their numbers couldn't keep up. "They nested once a year and produced one egg at best," he says. "And birds were being killed on the nesting grounds, so they were so harassed that they'd abandon the nest."