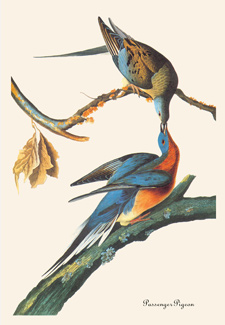 Greenberg says that hunters noticed things were changing by the late 1870s, but it was easy to make excuses."When confronted with an inconvenient truth, one way people deal with it is to deny it," he says.

In 1882, a couple of areas stillhadlarge nestings. One in Wisconsinhad a million birds — enough to lead people to think that there wereplenty of passenger pigeons left.But Greenberg explains that this wasa fraction of what the numbershad been, and it was the last time the birds congregated in anywhere near those numbers.

When hunters did suspect the bird was disappearing, they reacted in a way that made matters worse.

"Hunters could have done one of two things. One was: 'We want to keep this occupation, [so]let's lay off killing the birds,'" Greenberg says. "They did the other thing: 'This is a source of revenue; we're going to get every last penny we can.'"

After the last known wild pigeon was killed, there were still three captive flocks, two owned by researchers and one at the Cincinnati Zoo. It's not clear from historical records where Martha was born or exactly how old she was, but Greenberg says the best evidence shows that she was born in captivity and at some point was sent from one of the researcher's flocks to the zoo.

"She never knew flight in life — the only migrating she ever did was by train," he explains. The researcher taught in Chicago and was the director of a lab in Massachusetts. "When school let out in June, he'd load his pigeons up and go to Massachusetts," Greenberg says.

The second-to-last pigeon, named George, died on July 10, 1910, leaving Martha as the last of her kind. She became a big attraction, which wasn't necessarily a good thing."There are reports that crowds on the weekends would throw sand at her to get her to move," Greenberg says.

Keepers cordoned off Martha's cage so people couldn't get close, and as the bird got older and had difficulty moving, they lowered her perch to make it easier for her to get onto it. Finally on September 1, 1914, she was found dead in her cage.

As had been arranged, she was sent to Washington, D.C., where she was preserved. She has been at the Smithsonian ever since — leaving only twice for special occasions: once for a golden jubilee at the Zoological Society of San Diegoand once when a building was dedicated in her honor at the Cincinnati Zoo. Both times,she was flown first class.