The New Zoos: Designing Spaces With Animals in Mind 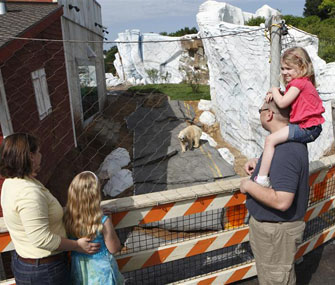 Courtesy of PGAV Destinations
The sink hole in this polar bear exhibit is actually an overlook. The depression acts not only as a barrier (moat) to the bears, but also as a climbing opportunity for them.

If you've visited a zoo recently, you may have noticed that the exhibits the animals call home look very different from the old concrete and metal bar living spaces the animals once inhabited. The new spaces are prettier, for starters, but what makes a good exhibit for an animal may not be exactly what you would expect. Ideas about appropriate zoo habitats are still evolving, and it's a complicated process.

Juggling the needs of animals, keepers and visitors can be a challenge, says Stacey Tarpley, who designs exhibits in her job with the firm PGAV Destinations and blogs about it at designingzoos.com. "Each of these groups often has competing needs, and all these things are trying to be put together to make this place where animals and people and staff can be happy and healthy together."

In the 19th century, zoo exhibits were natural looking, but not because designers were concerned with the needs of the animals. "They thought about the viewing area as a painting," Tarpley says. "The animals weren't really being addressed at that time — they were more like set dressing for the painting." In the mid-20th century, those romantic landscapes were replaced by concrete boxes that look barbaric to us now but were meant as a step up in animal care. "Animals started living longer because [zoo staff] could clean easily and control disease," Tarpley explains. But those bare spaces caused other problems both for animals and viewers. For example, behaviors like pacing emerged as symptoms of stress and understimulation.

In the late 1970s, zoos began to introduce the landscape immersion exhibit. The goal was to recreate a natural habitat — an attempt that wasn't always successful."We wanted to go back to the idea of creating this beautiful place where people feel good about being there but animals also are being cared for and have longevity," Tarpley says. "Those exhibits looked very nice and made people feel very comfortable." But though the spaces were a success in the short term, they often failed to meet the long-term needs of both the animals and the zoos.

The problems with creating specific landscapes for specific animals become clear when the species in an exhibit is changed, as often occurs because zoos have to make use of what animals they have. "You get an exhibit that was designed for, say, snow leopards, and it ends up being used 20 years later by baboons," Tarpley says.

"A snow leopard exhibit would be very vertical, there would be a lot of rocks, places for the animals to climb and to hide," Tarpley says. Put baboons in the same space, though, and for them it's only a little better than the concrete box, although it would still look like a nice wild habitat to the viewer. "The naturalistic exhibit gives a little bit more choice than the sterile environment, but you have to provide for the things that allow the animal to use the environment in the way they'd naturally want to," Tarpley says. Because baboons don't naturally climb, most of that vertical space would be of no use to them and wouldn't help them engage in their natural behaviors.