Home ›
Our Pet Experts ›
Kim Campbell Thornton ›
The Return of the Bankhar: An Ancient Mongolian Herding Dog Gets a Second Chance

The Return of the Bankhar: An Ancient Mongolian Herding Dog Gets a Second Chance 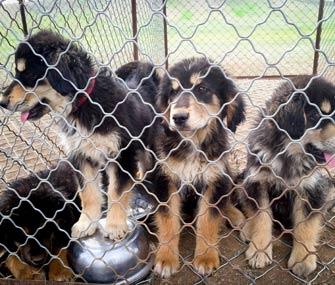 Bankhars are mastiff-type dogs that are distantly related to the Tibetan Mastiff.

As far as the eye can see, flocks of goats, sheep and other livestock dot the vast steppes and deserts of Mongolia, a country twice the size of Texas. With 75 percent of its land serving as pasture, herding has traditionally been the backbone of the Mongolian economy and the 52 million livestock outnumber the country’s 3 million people.

Nomadic herders tend the animals, but it’s not always easy to keep track of them on fenceless plains that are also home to predators such as wolves and the endangered snow leopard. Herders respect the predators but need to protect their flocks as well.

“One herder in the Gobi said he lost 70 animals in a year,” says Greg Goodfellow, a scientist who works with the Mongolian Bankhar Dog Project (MBDP). “That’s a lot to lose.” In an effort to stop such large-scale losses, the MBDP is bringing back the Bankhar, an ancient Mongolian herding dog.

“The Bankhar were traditionally and historically used here in Mongolia in this role, and that practice has died out,” Goodfellow says. “We’re trying to bring them back by working with herders throughout the country.”

Bankhar fell out of use as herding dogs in the 20th century, as shepherds turned to more lethal techniques, such as trapping and poisoning, to deter predators.

In 2004, Bruce Elfström, an American entrepreneur with a background in biology, was in Mongolia working on an IMAX film. Elfström found himself wondering why herders didn’t use livestock guardian dogs, which he had seen in other countries.

Elfström talked with herders and learned that in some remote areas of the country, shepherds were still using Bankhars, traditional Mongolian herding dogs, to protect their flocks. He began to think about how reviving the breed could help herders. In 2011, he founded the MBDP to put his ideas into action.

The Bankhar is a large, powerful dog with genes that go back thousands of years, based on DNA studies. They are Mastiff-type dogs, distantly related to Tibetan Mastiffs. Bankhar appear laid-back while overseeing their flocks but are highly alert and move with agility and speed if danger threatens.

Bankhars are considered to be a landrace rather than a pedigreed breed. A landrace is a domesticated regional variation developed over time through adaptation to a particular natural and cultural environment. That means that the Bankhar's traits were formed more by the harsh environment and isolated nomadic lifestyle of the Mongolian pastures than by human manipulation. Landrace dogs tend to have a uniform appearance but are typically more genetically diverse than dogs bred to a formal breed standard.

Traditionally, the Bankhar is black with orange spots above the eyes. According to Mongolian folklore, the spots permit the dogs to see into the spirit world. The dogs may also be golden-brown, white or black with a silver or white patch on the chest. White Bankhar are uncommon — Goodfellow says he has never seen one.