Home ›
Our Pet Experts ›
Gina Spadafori ›
The Scoop: Some Airborne Bacteria May Come From Dog Poop

The Scoop: Some Airborne Bacteria May Come From Dog Poop 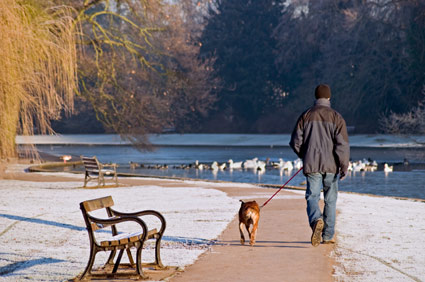 If the thought of touching dog poop, even through the plastic of a pick-up bag, is occasionally unsettling, brace yourself: If you live in Cleveland or Detroit, you may already be inhaling the stuff. A University of Colorado team tested winter air samples in four cities and found “significant” amounts of bacteria related to dog poop in Cleveland and Detroit. The other two cities, Chicago and Mayfield, Wis., had less. The canine DNA joined other sources of bacteria in the samples, including those traced to soil, dust, leaves, lakes, and oceans, as well as human and cow excrement (the latter presumably from the Wisconsin samples; the former, better not to dwell on).

The researchers, publishing in a recent edition of the journal Applied and Environmental Microbiology, were looking for the airborne bacteria that can trigger allergies and asthma symptoms, as well as potentially be a source of disease. None of the four cities had notable amounts of airborne bacteria traced to dog poop in the summer.

"What we've been looking at are the numbers and the types of bacteria in the atmosphere," said study author Prof. Noah Fierer, in a statement released by the Boulder, Colo., university. "We breathe in bacteria every minute we are outside, and some of these bugs may have potential health implications."

The researchers intend to expand their studies to other cities and try to better understand the ramifications of the poop-related bacteria in the air. While scooping the poop is always good “petiquette,” the findings may well trigger an expansion in the number of places where picking up after pets isn’t optional — it’s the law.