Home ›
Our Pet Experts ›
Caroline Golon ›
The Things We Do for Love: "I Take My Dog Golfing"

The Things We Do for Love: "I Take My Dog Golfing" 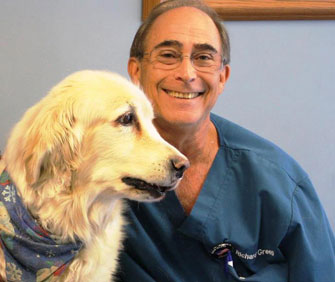 As the owner and medical director of Mont Clare Animal Hospital in Chicago, Dr. Richard Green, DVM has worked with thousands of animals during his career. But once in a while, one steals his heart like Maddie, his 12-year-old Golden Retriever, did.

Dr. Green and Maddie have been inseparable since he adopted her as a puppy. Maddie had developed parvo and was returned to her breeder, one of Dr. Green’s clients. Maddie stayed with Dr. Green while he treated her. By the time Maddie was well, Dr. Green had fallen in love with her. “She is just the sweetest thing. They’re all sweet, but we bonded,” he says. The breeder agreed to let the vet keep Maddie as his own.

Before Maddie would be an official member of the household, however, Dr. Green had to convince his wife, Willie, that another dog was a good idea. The family already had a Bernese Mountain Dog, Bud, whom they doted on.

So Dr. Green devised a plan. He first introduced Maddie to the couple’s then 6-year-old son, Clinton, and let him play with the Golden Retriever pup. Once Dr. Green had his son’s buy-in, he knew Willie wouldn’t be able to resist. He was right, so Maddie stayed.

From that moment on, Maddie went with Dr. Green everywhere, including work each day. “She’d even go with me to lunch,” he says.