The Top 10 Things to Know About Chinchillas 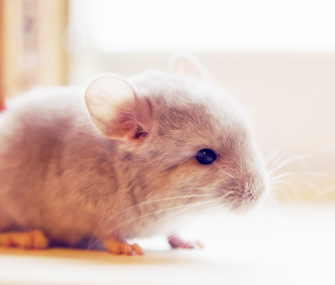 Thinkstock
Are you prepared to care for a pet chinchilla?

Chinchillas are charming, small rodents originating from South America, where they are now nearly extinct from being hunted for their thick coats. They are adapted to live at high elevations, where they inhabit the cool, rocky slopes of the Andean Mountains in Chile, Peru, Bolivia and Argentina, living in burrows and rock crevices in groups of several hundred. Chinchillas are commonly bred as pets in the U.S. and are available from reputable breeders, pet stores and rescue groups. They tend to be affectionate, curious and social animals that can bond closely with their owners and generally like to be held close and cuddled. Certain features of chinchillas make them unique, and anyone considering a pet chinchilla should know these 10 fascinating chinchilla facts.

Like other rodents, chinchillas have teeth that grow two to three inches per year. Their upper and lower teeth must align in order to wear down properly against each other as they chew. Improper alignment, or malocclusion, occurs when the teeth do not meet properly and, therefore, do not wear correctly, leading to overgrowth. This can happen with the visible front teeth (incisors) or the back teeth (molars and premolars), which you cannot see. Overgrown teeth may cut the tongue, cheek or lips, causing difficulty eating, oral pain, decreased appetite, weight loss, drooling, pawing at the face and tooth root infections. If you notice any of these signs, be sure to seek veterinary attention. To help wear down their teeth, chinchillas should be provided with untreated wood objects (available from pet stores) on which to chew.

Chinchillas require a high fiber diet composed predominantly of grass hay. While alfalfa hay can be fed to nursing and growing chinchillas (in youngsters, the author recommends up until about 9 months), timothy hay is preferred for non-breeding adult chinchillas, as alfalfa is too high in protein and calcium, and can lead to obesity and development of calcium-based bladder stones. In addition to unlimited amounts of hay, chinchillas can be fed one to two tablespoons per day of commercially available pelleted food formulated for chinchillas, as well as fresh vegetables. Small amounts of low-calcium-containing fresh greens (such as dark green lettuces, collards, squash and peppers) and very small quantities of high-fiber fruit (apples and berries) can be offered daily to provide fiber and to help wear down growing teeth. Excess vegetable consumption can lead to diarrhea. Sugary treats (such as raisins, dried fruits, yogurt drops, etc.) and high-fat foods (such as nuts and sunflower seeds) should be avoided to help prevent gastrointestinal upset and obesity. Fresh water should be given every day via a sipper bottle or water bowl.

3. They have extremely dense fur.

Chinchillas possess up to 60 hairs per hair follicle, as opposed to humans who typically have only one hair per follicle, making chinchillas’ fur coats very thick to allow them to retain body heat at high altitudes. Unfortunately, their thick coats have been coveted by poachers who have trapped and killed wild chinchillas to sell their pelts for fur coats, contributing to their near extinction in the wild. Pet chinchillas’ soft, velvety coats make them very attractive to stroke and cuddle.