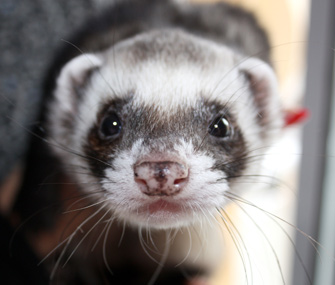 Thinkstock
Ferrets can be trained to use the litterbox, play fetch and come when called.

Some people have preconceived ideas about ferrets, many of which simply are not true — or at least not the whole truth. If you have ever thought about sharing your space with a ferret, take this quiz to learn some interesting facts about this furry fellow.

1. True or false: Ferrets are not very smart.

False. Quite the opposite is true — ferrets are highly intelligent animals. They can learn surprisingly quickly and are quite trainable. Most ferrets can be trained to come when called, do tricks and use a litterbox. 2. True or false: Ferrets are antisocial.

False. Ferrets are generally playful, affectionate pets, although they do have moments when they act more independent. When they reach adulthood (at 1 year old), most ferrets will try to gain your approval and spend a lot of time hanging around you and following you around. 3. True or false: Ferrets get into everything.

True. It does seem like ferrets get into everything — sometimes even if you think they can’t. For instance, things that are childproof most likely are not ferret-proof. Ferrets are curious and intelligent. Many can open drawers and cabinets, unscrew bottle tops and unzip zippers. If a ferret’s head fits into or through something, his body will probably fit, too. Expect to make slight modifications to your home, such as removing plants to prevent digging and adding plastic or wooden runners under carpeted doorways to discourage tunneling. 4. True or false: Ferrets bite everyone and everything.

False. Ferrets sometimes nip as part of playing. They tend to exhibit this rough play with other ferrets, but if their only playmate is you, they may bite you at first. Luckily, since ferrets are such smart creatures, they can often be trained to lessen this behavior. 5. True or false: Ferrets are hostile toward children.

False. As a rule, ferrets are not inherently hostile toward anyone, and they certainly do not go around attacking children. However, it probably is not a good idea to get a ferret if you have an infant or young child (under about 8 years old). Even a well-taught, well-meaning child might inadvertently squeeze a ferret a little too hard and injure the animal’s delicate back, or harm him unintentionally in some other way. And ferrets, similar to dogs and cats, may bite if they are being hurt. 6. True or false: Ferrets have a peculiar smell.

True. Ferrets do have a distinctive musky odor. Even spayed or neutered, ferrets will retain that odor, although it will not be quite as strong. Ferrets do not need frequent bathing, but some owners bathe monthly. Changing their bedding frequently (at least weekly) will help diminish odors overall. 7. True or false: Ferrets sleep a lot.

True. While ferrets do sleep a lot — and quite soundly — they also love to run around. Ferrets are extremely active creatures and need to have time out of their cages — supervised, of course, to discourage inappropriate chewing and other mischief. Contrary to another popular belief, ferrets are not nocturnal. They may spend 75 percent of their time sleeping, but they tend to be active otherwise and can adapt over time to your schedule. 8. True or false: Ferrets need regular veterinary care.

True. Just like many other pets, ferrets need to receive vaccinations and routine veterinary exams, and should be spayed or neutered. Your veterinarian can help you learn more about these interesting pets.