Tips to Stop a Dog From Tugging on Clothing 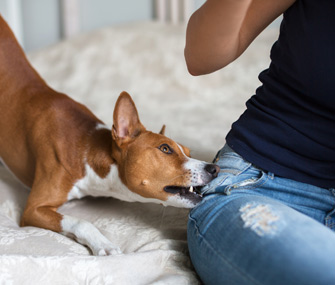 Thinkstock
This behavior may seem like a small nuisance when your dog's a puppy, but it can become dangerous as your dog gets older.

My dog sometimes pulls on pants and sleeves. I think she’s playing, because we let her do this as a puppy, but she doesn’t stop. What can I do to end this behavior?

Puppies will often mouth and tug at clothes. These antics may appear amusing and adorable, but as the puppy grows into a bigger, stronger and more focused adult dog, they can become worrisome or even dangerous. Prevention is always the best strategy — keep play directed toward toys instead of human skin, hair or clothing.

Fortunately for you, old dogs can learn new tricks — and unlearn unwanted habits. To effectively resolve your dog’s mouthing, it’s helpful to understand where the behavior comes from and how to offer alternative replacement behaviors that satisfy both you and your canine.

Why Mouthing is Not Ok

One of the many things a puppy needs to learn is to be careful with his bite — but allowing a puppy to mouth human hands or people's clothes will not teach this. Encouraging a dog to play by biting at human hands, skin, hair or clothes is inadvisable. This type of play teaches your dog that people and their clothes make acceptable chew and tug toys.

Any and all mouthing of hands, skin or clothing should result in immediate removal of the hand or body part and a minute or two of no social interaction with the puppy. This teaches the puppy that putting teeth on the human is the end of playtime.

Dog owners often assume that a dog can discriminate between a situation where roughhousing or mouthing is acceptable and one where it’s not. This is too much to ask of most dogs. Instead, your dog is likely to instigate such play at inappropriate times, such as during a walk or with people for whom it’s especially concerning, like children. It’s easier for everyone, especially the dog, if the guesswork and confusion are removed by having consistent guidelines for how play and interactions occur.

Put a Stop to Mouthing

Consistency is the key to preventing any undesirable behavior. If a bad habit has already developed, you will need to limit your dog’s options for practicing the behavior in the future and offer desirable alternatives for him instead. Here are four simple ways to put a stop to mouthing clothes in a puppy or adult dog.

Do not react to the mouthing. Part of the joy for dogs when they jump up is experiencing the person’s reaction. Pulling back and away from the dog creates resistance for a tug-toy type experience if the dog’s grabbing onto clothing. Screaming, shrieking or pushing the dog down or away are other reactions that feed energy into the already excitable dog. Instead, freezing in place and avoiding a reaction as much as is possible (standing still, looking down and away from the dog, remaining motionless and tucking hands under in a cross armed position) is more likely to cause loss of interest.