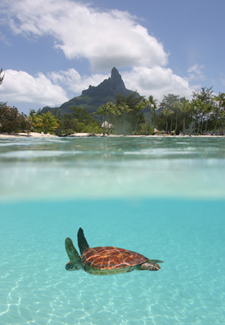 Le Méridien Bora Bora has its own endangered turtle sanctuary.

There are lots of reasons to vacation: stress release, exposure to new foods and cultures, quality time spent with loved ones — and saving animals.

These hotels — plus a cruise ship — turn well-deserved relaxation into a virtuous endeavor through partnerships with science foundations and academic institutions, offering guests the chance to help preserve local wildlife in between dips in the pool.

The Place: Le Méridien Bora Bora is a sanctuary that attracts honeymooners and relaxation seekers alike, who can sleep in thatched overwater bungalows and swim with sharks and stingrays in impossibly turquoise waters.

The Program: The resort has been actively involved with marine turtle conservation since 2000 by partnering with Bora Bora’s Ministry and the Delegation of the Environment to create a Turtle Observatory and an enclosed Turtle Sanctuary in the resort's private lagoon. Along with more than 100 species of tropical fish, the endangered turtles are bred for three years or rehabilitated and released. Guests can "adopt" turtles and track their progress, and this June, the hotel is unveiling an Ecological Center, complete with on-site biologists and veterinarians, a rehabilitation center and a kids touch pool filled with starfish.

The Place: Compared with other Caribbean islands, Virgin Gorda has seen little development. In fact, the beachfront Biras Creek is one of just two upscale resorts on the island, with 31 suites and 140 acres for guests seeking privacy. (The owners of the property, Pam and David Johnson, have also made conservation efforts a priority at their stateside property in Michigan, Bay Harbor Resort.)

The Program: The resort currently houses five rescue horses who are being nursed back to health, including a 23-year-old former racehorse named Sorbetto (Spanish for “strong”), an 11-year-old former street racer named Fugitive and 7-year-old Kid, who was bred for show but discarded because of an imperfect gait. Guests can visit with the horses and their on-site trainer, as well as help feed and care for the animals.