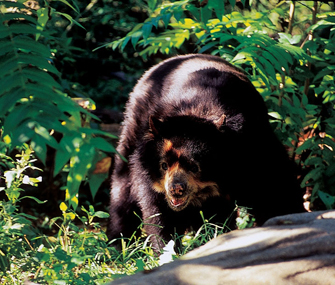 The Animals: Spectacled or Andean bears

The Place: Located in the Cusco region of Peru, the Inkaterra Machu Picchu Pueblo Hotel is composed of private casitas set on 12 acres of rolling hills, with views of the Vilcanota River.

The Program: Inkaterra just won the 2012 prize for conservation at this year’s Tourism for Tomorrow Awards, which makes sense considering it’s been all about sustainability for the past 37 years. Since 1975, the hotel group has worked with notable organizations like the University of Leeds to nurture and preserve orchids, hummingbirds, butterflies and the cloud forest.

In Machu Picchu, their Wildlife Rescue Center focuses on spectacled or Andean bears, which are in danger of extinction. Currently, there are three bears on location, including an 11-month-old cub who was rescued from poachers. Guests can visit and learn about the bears at the rehab center.

The Place: Atlantis Resort, named for the mythical Greek island, offers rooms and experiences for a range of travelers, from the more casual Beach and Coral Towers to the upscale Cove, an adults-only section of the resort with fine dining (Nobu, anyone?) and a decadent spa. The family-friendly destination also has a water park and a marine habitat.

The Program: It’s all about the bottlenose dolphins here: In addition to interactive coves where guests can meet the ocean-dwelling creatures, the resort's “Dolphin Cay” is home to a specialist-staffed rehab facility and 16 animals displaced by Hurricane Katrina, some of which have given birth since their arrival with the help of on-site marine mammal specialists. Meanwhile, a portion of the proceeds from the dolphin programs is donated to the Kerzner Marine Foundation, which supports marine preservation through scientific research, education and community outreach.

The Place: The glamorous Huvafen Fushi, which resembles a stingray from above, has underwater spa rooms, overwater bungalows and an underground wine cave. Guests can even slumber on a traditional Maldivian dhoni sailboat!

The Program: The resort is committed to rebuilding, conserving and protecting the living coral reef that surrounds the Indian Ocean island. Guided by the staff marine biologist, guests can participate in the Coral Cultivation Initiative and snorkel out with a biologist to a coral nursery, where bits of coral nestle in small concrete cups. Each participant chooses an orphan coral to tag and name, which is ultimately transplanted to a larger reef to help it thrive.

The Place: Aboard the Orion II, travelers sail the high seas with 100 fellow passengers while luxuriating in five-star service with a casual vibe. Orion Expedition Cruises are known for their less-traveled destinations, including more remote areas of Russia, Japan, New Guinea, Cambodia and even sub-Antarctic islands.

The Program: Starting in late 2012, the Orion II will venture on its first Borneo season, including three voyages that will take passengers — along with renowned primatologist Dr. Biruté Mary Galikas — to her Orangutan Foundation and Preserve, Camp Leakey. Guests will have rare access to the Infant Care Centre & Rehabilitation area, as well as an orangutan feeding station. Orangutan Adoption Kits are also purchased by the cruise line for each passenger.