Home ›
Our Pet Experts ›
Nora Zelevansky ›
Two Cats and a Baby: One Mom's Adventures in Parenting Pets and People

Two Cats and a Baby: One Mom's Adventures in Parenting Pets and People 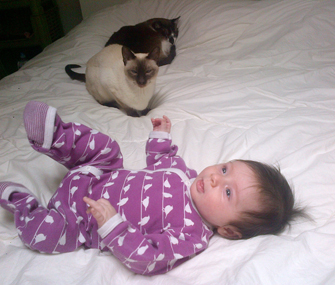 This may sound insane, but when I found out I was pregnant last year, one of my first concerns was my cat, Mina. I’ve had Mina for almost 15 years. She is a Siamese, so she's fairly high-strung and needy. And she hates high-pitched noises. Though she’s generally sweet and affectionate, when I sing, she literally growls, stalks me and tries to take me down. My voice is bad, but not that bad.

So I worried: What would she do when the baby cried?

My other cat, Waldo, was less of a concern; he's an American Snowshoe (we think) and a big bruiser rescue. My husband, Andrew, and I figured he would either run away from the baby or want to cuddle with her.

But then a friend raised the issue of Waldo climbing into the crib for warmth and suffocating the baby accidentally and we had something new to fret about. (It turns out that this phenomenon is just an urban legend. The now-recalled cat tents and netting for cribs that parents bought to keep babies safe are more dangerous than the animals.)

Other helpful friends suggested we get rid of our cats altogether: “You won’t care about them anymore once the baby comes,” they predicted. That was hard for us to imagine — we’re pretty attached to our animals.

It turns out that welcoming our first child did, indeed, involve cat-related drama — but it was nothing like what we expected.

A New Home — With New Cats

Late in my pregnancy, we discovered black mold in our New York City apartment. Our landlord dragged her feet for so long that we had no choice but to vacate. The baby was due any minute, and we couldn’t bring her home to that mold! We had to go somewhere that was safe, that was available immediately and where we could stay indefinitely. And we needed to bring both cats, of course.

Our only option was my parents' house ... in Pittsburgh.

To complicate matters further, my parents have two cats of their own, a brother and sister duo named Pom and Flora. As if that weren’t enough, one of my parents’ cats has a gluten allergy and couldn’t risk eating our cats’ food.

To ease everyone into living together, we wanted to keep the cats separate, at least at first, so my cats were given their own attic loft lair. But the felines weren’t having it: From the very beginning, Pom banged on the attic door, insisting that we let him up and them down. Within days, Waldo had figured out how to unlatch the lock. We’d walk into the hallway and find them staring at each other through the crack in the door.

Two weeks before my due date, while my parents were out of town, we noticed that Mina was acting lethargic and drinking a lot of water. She’d had urinary tract infections before, so we assumed that’s what was going on this time. Still, it was a Sunday, and the vets we called were all closed, so we had to search out and take her to an animal hospital.

The situation was much more dire than we had imagined: Mina was in renal failure and had to stay in the hospital, hooked up to an IV, indefinitely. For days, we drove back and forth to visit her. I was gigantic and uncomfortable. Outside, the temperature dropped to 8 below zero. A pipe burst in the house, and we had no hot water. Finally, we were able to take Mina home with instructions for administering three different medications — liquids and pills — and IV subcutaneous fluids every day.

At least we were all safe and warm.

Andrew joked that if the baby came while my parents were still away, he would just empty a giant bag of dry cat food onto the floor of the living room and run. There were too many pets to think about! But when I did go into labor (12 days early, while my parents were gone), he did exactly the opposite: As I stood in the hallway, holding my belly and moaning, “Let’s go! The contractions are getting closer together!” Andrew ran around cleaning litterboxes and setting out food and making sure the cats — all of them — were taken care of.

Our daughter was born that day. My parents returned early from their trip, and Andrew and I brought the baby home from the hospital. And then the routine of our new life as a family began.

Every morning, we would feed Mina upstairs in the attic and Waldo in our bedroom, while Pom and Flora ate downstairs. (Between the gluten-free food for Pom and Mina’s new renal diet, we had to be extra vigilant about keeping them separate during mealtimes.) When Mina and Waldo were finished, we would clear their plates and open the attic door, so Pom and Flora could safely enter.

Andrew would scoop the litterboxes, and then we would administer Mina’s first round of medication — that is, if the baby wasn’t crying. It took two people to give Mina her IV and pills, so if the baby needed me, the cat had to wait.

As the day went on, we would alternate caring for the baby with breaking up standoffs between the cats. It went on and on from there. My parents helped where they could, both with the baby and with the cats.