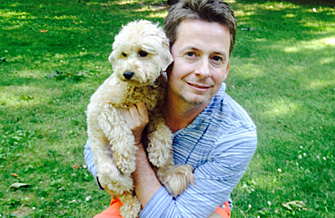 Courtesy of John Searles
The author poses with his dog, Ruby.

OK, so maybe he’s not doing that for me so much as our puppy, Ruby, who flips onto her back and licks his face, but it makes me happy to watch nonetheless. And though I never get quite so excited a greeting from Thomas, he does eventually stand and give me some love and attention, too.

It used to be that when he arrived home after a long day, he would ask how I was doing. He still does, of course, but not before first interrogating me about Ruby’s day. Though I'm good at offering reports of her interactions with dogs she met on our walk or a ridiculously cute new thing she does, I'm less good when Thomas peppers me with questions like, "When did Ruby last eat?" and "What time did you walk her?” and "When did she last do her business?"

By now, I should know enough to keep track of our puppy’s every meal and footstep and bowel movement, so I can provide him with a detailed report. Instead, my answer is almost always, “I don’t know exactly.” It's not that I don't love our little Goldendoodle — like Thomas, I’m crazy about her — but I have a more casual approach to her care. Which is where our pet parenting styles differ. When she taps her bowl with her paw, I feed her. When she stands by the door, I grab her leash for a walk. When she brings me her ball, we play an impromptu game of fetch. But Thomas aims to feed and walk and monitor her activities with such obsessive precision, it often leads me to roll my eyes.

Our different approaches can be traced to our childhoods. I grew up in a chaotic and tiny house with four kids, my mom, dad and grandfather, where a roster of pets came and went. My mother’s best friend was moving and needed someone to take her parakeets? Sure! My truck-driver father won a puppy in a card game on a trip to Louisiana? Welcome, Barney! My grandfather’s co-worker at the factory found a stray poodle? We called her Bitsy, and she was my birthday present when I turned 15.

All those people and pets under the same roof meant there was little time to obsess about every detail of their existence. Somehow, they always got fed and cared for without the hyperfocus of an emergency room nurse. (Of course, all these years later, it occurs to me that my mom was actually doing all the caretaking while her kids were busy watching TV.) Every cat, dog, fish, bird and turtle — yes, we had those, too — who came through our house was happy and loved without any sort of overly rigid approach to their care. And that’s the same easygoing attitude I bring to Ruby.

But Thomas grew up with just one pet: a giant, drooling Saint Bernard named Sam whom Thomas got for his second birthday. Sam was fed at the same time every day and taken on walks on a leash around the neighborhood. When Thomas started school, the dog waited with him at the end of the driveway for the bus each morning. The dog came to know his schedule so well that he walked to the same spot and waited for him to come home each afternoon, too. Sam’s life was so well monitored, in fact, that when he slept in the family garage at night, Thomas' parents kept the automatic door opener on their nightstand. When the dog wanted to be let out to do his business, he barked and they reached over and pressed the button to open the door. When the dog wanted to come back inside, he barked and they pressed the button to close the door. 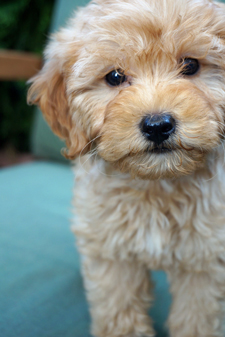 Given our dissimilar backgrounds, it’s no wonder we have such vastly different pet parenting methods. Having been in each other’s lives for almost 18 years now, I’m aware that our approaches differ in other areas, too. As a theater director, Thomas is used to carefully controlling schedules and performances. Whereas I'm a writer and change my plans on a whim, waking up in the middle of the night and clacking away on my laptop, then sleeping in the next day if I feel like it.

Those opposing styles have been fine when it comes to our work, but now that we have Ruby, I've come to realize we have to adjust. I've been forced to admit that a bit of structure is a good thing and have begun to pay more attention to her daily routine — even if I haven't gone as far as creating a spreadsheet, which I'm sure is what Thomas secretly desires. And I suspect that all my eye rolling will lead Thomas to lighten up with his nightly interrogations and more regimented approach to puppy raising. At least, that’s my hope.

But I realize as I watch him fling himself on the floor and greet Ruby like he's returning from war — not just a short trip to Midtown — that we agree on the most important thing: that this furry, funny dog deserves the best we can give her. Even if we both have to bend a little to make that happen.

John Searles is a best-selling novelist whose most recent book, Help for the Haunted, was just released in paperback. His essays, articles and reviews have been published in The Washington Post, The New York Times, The Daily Beast and more.