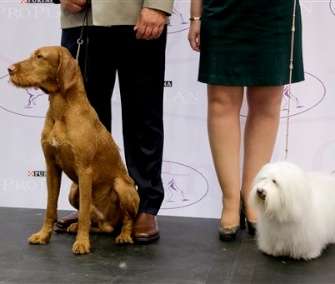 AP
Falko, left, a Wirehaired Vizsla, and Luna, a Coton de Tulear, pose on stage with their owners Tuesday.

There will be two new faces at the 2015 Westminster Kennel Club Dog Show: the Wirehaired Vizsla and the Coton de Tulear. The Wirehaired Vizsla originated as a hardy hunter from Hungary, and the Coton de Tulear is a small companion dog known as the "royal dog of Madagascar." Breeds are added to the competition after they’re recognized by the American Kennel Club, which has criteria including having several hundred of the dogs registered in the U.S. The pair brings the number of breeds in the Westminster show to 180. It takes place in New York City on February 16 and 17. — Read it from the AP via People Pets