Understanding the “Catness” of Cats 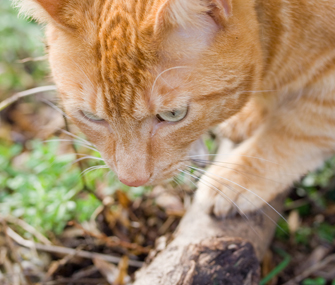 I had the pleasure of giving a talk at a veterinary symposium not too long ago in San Antonio, Texas. I arrived a day early, so I decided toget some continuing education for myself while I was there. I often try to go to talks about topics that I want to know more about. One of my interests is environmental enrichment and low-stress handling of cats, so I was surprised and intrigued to see a series of talks by Dr. Tom Noffsinger, a large animal practitioner from Nebraska, on low-stress handling in cattle.

While I’ve spent most of my veterinary career studying cats, I grew up on a Black Angus cattle ranch in Central California. This was during the 1950s, when “cat” and “veterinarian” would not have been used in the same sentence. A lot has changed since then, but not my love for cows. Dr. Noffsinger talked for four hours toa room packed with large-animal veterinarians. I thoroughly enjoyed his talks, even though they made me feel a bit like Rip Van Winkle, waking up after about 40 years away from the ranch.

All Greek — but Still Simple

It seems that in the ensuing years, much of animal husbandry — caring for animals as they are — somehow got replaced by animal science--usinganimals as "production units" without considering how they work. How animals “are” based on their wild heritage is called telos, from the Greek word for “purpose” or “goal,” and is a concept that has been around since the days of Aristotle. When referring to animals, it relates tothe essential nature of that particular species; in other words,the idea that “fish gotta swim, birds gotta fly, and cats gotta climb and scratch.” What Dr. Noffsinger was recommending (reteaching really) to the room full of veterinarians at that conference was how to work with the animal’s telos rather than against it. His strategy for effective low-stress handling (using feedlot calves as his example) had four specific recommendations:

As these ideas sank in, I realized that this strategy can work for all animals, cows or cats, clients or colleagues, and was a short summary of much of what we have learned about our feline patients.

A Safe Cat Is a Happy Cat

There is another aspect of teloswe need to consider, which isthat the essential nature of a particular species can only be expressed when that animal feels safe. By safe, I mean having a strong enough perception of control and predictability to be able to cope with one’s surroundings. This is a particularly important issue for many cats who are confined indoors. Because of this, they live in many ways like zoo animals, utterly dependent on their keepers (owners) for every aspect of their lives. This includes what and when they eat, when and where they eliminate, and whether or not they can engage in activities that express their “telos” without being punished for their behavior.