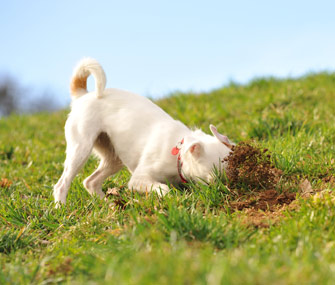 Thinkstock
Terriers are bred to dig out burrowed animals, which can translate into unwanted digging in your yard or garden.

My first dog was a Wire Haired Fox Terrier named Scooter. Like many terriers, she was energetic, determined, playful and independent. She was also something of a terror, though. My early experience with terrier tenacity is largely why I became an animal trainer.

Scooter was not the devoted dog I had dreamed of; she was independent and ran away every chance she got. She dashed through open doors or pulled out of her collar and took off running. She was oblivious to my panic-stricken pleas and would run until she was cornered.

Scooter destroyed our yard. She was a digger who turned our lawn into a minefield of holes and mounds. She also took it as her duty to patrol the perimeter of our fence with such fervor that she wore a path all the way around the yard as well.

Most problematic of all, though, was the barking. Scooter barked constantly, which caused problems with the neighbors. One night my brother and I were home alone when we heard someone yelling and pounding on our front door. I called the police, convinced we were in danger. My parents came home to find police cars in our driveway and officers searching for the intruder. It turned out that the man at the door had been our neighbor; he was furious about Scooter’s barking and had come to lecture us about the noise.

Scooter was, indeed, a Terrier Terror.

Scooter was a pretty typical terrier. Fortunately, I learned how to manage her and was able to train her to be obedient and well-behaved. But my experiences with her taught me some important lessons about the terrier breed — and about how to work with them.

Terriers are notoriously feisty with other dogs; they were bred to hunt solo and thus had little need for sociability. A terrier who spends time around other canines from an early age may learn to be friendly with them. But even with appropriate socialization, some terriers are best suited to single dog homes and may not do well in certain situations, like at the dog park.

Terriers are commonly friendly, but are rarely the type who thrive on being held or coddled. Because they were bred to work independently, terriers are less attached to people than other comparable dogs. Certain breeds of terrier are more likely to be wary of strangers; for these dogs, extensive socialization with a wide variety of people, including children, is necessary.

Terriers were bred to chase down and kill small animals, which can make them a hazard to other pets, particularly smaller rodents. If introduced early enough to other animals, a terrier may learn to adjust and get along well with them. Some terriers will never be good candidates for homes with small animals, though, because their predatory drive is too high.

Terriers are bred to dig out burrowed animals, which can translate into unwanted digging in your yard or garden. A simple solution to this problem is to create a digging pit for your terrier. Terriers are also escape artists who run and roam. For this reason, most terriers require secure fencing and do best when kept on leash when they’re outside of their yard.

A Busy Terrier Is a Happy Terrier 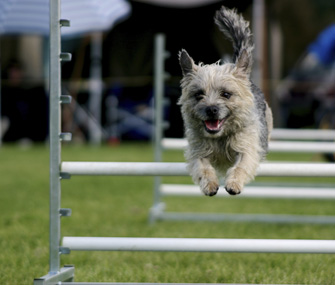 Terriers need a variety of outlets to release their abundant energy, including lots of exercise. Despite the small size of many terriers, the group tends to be incredibly athletic. They can make ideal workout partners for activities like hiking, jogging and long walks. Many terriers excel at doggy sports, including agility, Earthdog, lure racing, fly ball and scenting.

Terriers respond well to reward-based training, in particular clicker training, because they are problem solvers and highly motivated by incentives, like play and treats. Impulse-control exercises like waiting at the door are especially important for teaching terriers delayed gratification. Lastly, food puzzles can be indispensable at mealtimes, as the process mimics your terrier’s inborn predatory instinct.