Home ›
Our Pet Experts ›
Dr. Tina Wismer ›
Use Your "Spidey Sense" to Keep Pets Away From These Arachnids

Use Your "Spidey Sense" to Keep Pets Away From These Arachnids 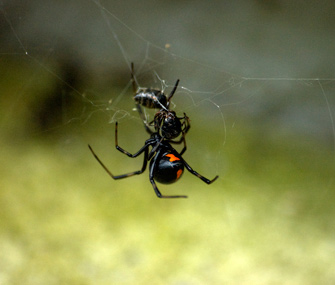 Spiders are everywhere! There are over 30,000 species of spiders in the world. The good news, though, is that in most cases, spider bites cause little more than local pain and inflammation. Most species of spider are unable to penetrate human or animal skin. Luckily in the U.S., there are only a few spider species whose bite can cause severe problems in people and pets. These are the widow spiders, the brown recluse spider and the hobo spider.

Widow (hourglass) spiders belong to the genus Latrodectus. Widow spiders get their name from the female's practice of killing the male after breeding, although this does not always occur with every species.

There are five species of widow spiders found in the U.S.:

Widow spiders like dark, nondisturbed places. They can be found inside buildings or outside in leaf litter. These spiders are not aggressive and will only bite defensively. Cats tend to get multiple or severe bites due to their propensity to poke at and harass the spider. Bites are typically from female spiders, as the male’s fangs are too short to effectively penetrate skin.

Widow spider venom is absorbed into the circulatory system where it causes neurologic signs. The bites are immediately painful. On nonhaired skin, a slight redness may be noted with two small puncture wounds 1–2 mm apart. In 30 minutes to two hours, muscle cramps will begin near the bite site and then spread to other large muscle groups. Pain peaks in two to three hours. High blood pressure and high heart rate are common. As the signs progress, vomiting, diarrhea, paralysis and death can occur. Cats are more susceptible to severe problems than dogs.

A single bite can cause life-threatening signs, but fortunately, “dry bites” (no venom released) are possible. The severity of the signs depends on two sets of factors — the spider and the victim. Spider-dependent factors include the size of the spider, the amount of venom injected and the time of the year (warmer temperatures appear to increase the toxicity of venom). Victim-dependent variables include the animal species, the size of the animal (smaller animals are more susceptible), the location of the bite, underlying health problems and age (younger and older victims show more severe signs).

Any suspected widow bite should be evaluated by a veterinarian. Treatment involves pain medications and muscle relaxants. There is an antivenin, but availability for animal use is sporadic at best, although it has been used in at least one cat with good results. Most animals recover in 48 to 72 hours, although some people report weakness and fatigue lasting for weeks to months. Fatalities are uncommon, with estimates ranging from <1% to 6% in humans.

There are a few species of spiders in the U.S. that can cause a large area of cellular damage (necrosis) with their bites. The brown recluse (Loxosceles reclusa), or fiddleback spider, has a distinctive fiddle-shaped mark on its back. They are generally found in the south central U.S. (Texas through Georgia) but can be found as far north as Iowa, central Illinois and Indiana. The brown recluse is nocturnal and not aggressive. Other species of Loxosceles may produce wounds that are not as serious as the brown recluse's bite. Hobo spiders (Tegenaria agrestis) are found in Washington, Oregon and Idaho (as well as western Canada and Alaska), and can cause similar necrotic lesions like the brown recluse. They are large, aggressive brown spiders and build their webs at ground level or in basements.

Recluse spider venom contains compounds that destroy cell membranes. The venom attracts white blood cells, which also increases the cellular damage. If absorbed into the blood stream, the venom can break down red blood cells, causing anemia. The venom also affects coagulation and can cause bleeding.