Home ›
Our Pet Experts ›
Amy Sinatra Ayres ›
Were There Dogs on the Mayflower?

Were There Dogs on the Mayflower? 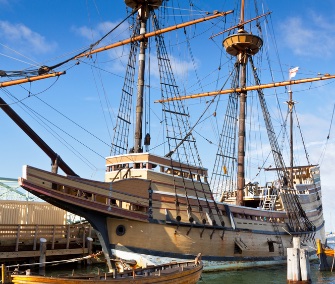 iStockphoto
The Mayflower II, a replica of the original ship, is docked in Plymouth, Massachusetts.

If you were on a voyage to a new land, would you want your dog’s companionship and protection? There’s solid evidence that some of the Pilgrims did. There were at least two dogs on board the Mayflower when it left England in 1620, bound for the New World.

As we get ready to celebrate Thanksgiving, Vetstreet talked with Chris Messier, a living history interpreter who plays Master Jones, the captain of the Mayflower, on a replica of the historic ship in Plymouth, Massachusetts.

“I’ve been playing Master Jones for probably more than 10 years,” Messier says. “We meet a lot of children and they always ask about the animals on board. Dogs are the most certain answer I can ever give.

“There was a Mastiff and there was a Spaniel, and because they do interesting things they get written about” in history, Messier explains.

It wouldn’t be surprising for the canines to have joined their owners on the trip, he says, because the English and Dutch (some of the people on board were from Holland) clearly had a love of dogs, even back then. We know this because they often appeared in portraits and other paintings at the time. Popular types of dogs included Mastiffs, Hounds,Spaniels, Terriers and lapdogs, Messier says.

He says he’s convinced that his character, Master Jones, brought a dog along. That’s in part because Jones had been commanding ships for 27 years, and sailors were frequently given puppies as gifts in different ports, and also because there’s documentation that he’d been taken to court in England for illegally having hunting hounds when he didn’t have the required amount of land.


Cats Were on Board, Too

Dogs weren’t the only animals on the Mayflower. Messier says there’s also evidence that pigs, goats and chickens — as well as cats and rats — were on board.

Cats were commonly brought along on ships to catch the vermin. In fact, captains who were responsible for the cost of any spoilage could get a break on their costs if they had a cat on board, Messier says.

Felines were also considered good luck — and many sailors wouldn’t even make the trip if there wasn’t a kitty companion on the voyage. It was believed they could sense a storm was coming, giving the crew time to prepare.

Most of the cats on board were feral, but there are reports of sailors taming kittens to become pets, Messier says.

The Pilgrims and their animals ran into newfound hazards in the New World — including wolves.

Messier tells one story about how the Mastiff and Spaniel, who belonged to John Goodman and Peter Brown, had a scary run-in with the predators. The English dogs had never seen wolves before and apparently thought they were also dogs, he says. They brought them back to their masters, who had a hard time defending themselves from the wolves.

Thankfully, the Pilgrims survived and the Spaniel is credited with chasing the wolves off.

Natives and Pilgrims Had Dogs in Common

Once the 102 people aboard the Mayflower arrived in America, they discovered that the Native Americans had dogs, too. In fact, it was the only animal that the two groups had in common, Messier says.

The Natives’ dogs would often be the first to be aware of the approach of the English if they attempted to ambush one of their villages. But the Natives only had small dogs, and the English sometimes used their huge Mastiffs to terrify them.

It’s believed that there were likely more dogs with the English settlers, too, because of accounts that they were used to help their masters with hunting. So it's fair to presume that, in 1621, when the Pilgrims gave thanks for a bountiful harvest after a year of sickness and scarcity, there were probably numerous four-legged friends crowded around the table, too.

Beloved dogs were often around dinner tables back in the Pilgrims’ native England, Messier recalls. If the dogs who arrived on the Mayflower were anything like typical dogs today, maybe they were looking for scraps when the settlers had their first Thanksgiving meal!