What It's Like to Be an Avalanche Rescue Dog 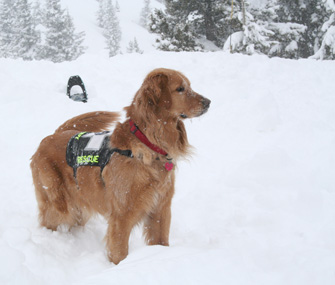 If you ever spot a dog jumping onto a ski lift, don’t worry, the high altitude isn’t getting to you. You may have spotted a canine avalanche expert, an essential member of a search-and-rescue team. These rescue dogs deploy to locate skiers, snowmobilers and other mountaineers (sometimes even other dogs) who get caught in an avalanche. They can trace a buried victim far more quickly than human searchers, with the ability to sniff out people stuck under several feet of snow.

And since victims have a good chance of survival if they’re found within 15 minutes (barring other trauma), every second — and every sniff — counts.

Ski patrollers and community search-and-rescue volunteers train and handle these dedicated dogs. To be eligible for emergency response, both the dogs and their handlers must pass timed certification exams, testing their endurance, communication skills and ability to find targets quickly in a complicated debris field.

Come behind the scenes as Vetstreet takes a look at the daily lives of these heroic dogs who redefine what it means to be a professional “powder hound.”

Morning: Time to Go to Work — on the Mountain

An avalanche dog’s day usually starts with a short obedience routine before a protein- and fat-packed breakfast, giving them fuel for a busy day. After a quick game of fetch to take the energy-edge off, the dog gets dressed for work in a bright patrol vest. If needed, he may also get a slathering of Vaseline between his toes to help prevent painful snow clumping.

Then it’s time for the commute by way of a chairlift up to ski patrol headquarters, where the dogs are stationed throughout the day. During the morning patrol briefing, the dogs can get in some playtime with one another — as well as with the patrollers. From a young age, search-and-rescue dogs must be well socialized, familiar with the entire ski resort and comfortable with loud noises, such as a helicopter’s roar.

When it’s time to buckle down though, these canines leap into action. “The dogs will go right to work, even though they’re around all these distractions," says Patti Burnett, a renowned avalanche dog handler with the Summit County Rescue Group and author of Avalanche! Hasty Search. "They go from puppy mode to wanting to be all business. They sense how important it is.”

Above all else, obedience to voice and hand commands is crucial. Handlers will regularly expose their dogs to new and unusual experiences to build a trusting partnership. For instance, a handler may practice rappelling off a chair lift, while carrying his clipped-in dog down the rope. As the old George Michael song goes, you gotta have faith.

Afternoon: Nose to the Scent Cone, Paws to the Packed Snow

Once the patrollers’ and handlers’ morning tasks are done, they start to set up the dogs’ training programs. In early training, just a handler and one or two helpers will go along with a dog. With more experienced canines, handlers stage elaborate scenes, with several people and dogs working a field together. Regardless of the scenario, the trainers get very familiar with their shovels!

Exercises for young dogs start with a basic hide-and-seek. After digging a trench in the snow, the handler will hold the dog, while a helper calls to the canine, runs away and then jumps into the trench, dropping out of sight. When the dog is released, he must race over and find the helper.

Once they've mastered a basic search, the dogs then graduate to covered targets. Handlers build snow cave hiding places and the canines must rely on their nose to pinpoint a “scent cone,” whose distinctive scent molecules rise through tiny air pockets in the snow. At first, handlers will leave the snow cave entrance open, so the dogs quickly see them and rush in. Eventually, handlers will block the entrance with a hunk of snow, so that the canines need to dig to break through. 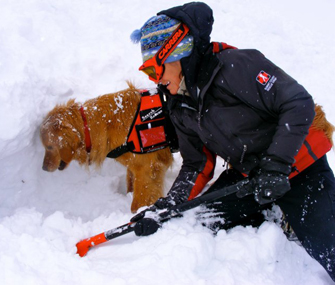 Finally, brave volunteers will dig pits and climb in, carrying two-way radios and scent cones. Snow blocks seal them in, and then snow is piled on top to hide any trace of their location. Just as in a real-life search, other helpers probe the area, flag a strike and grab their shovels to help dig the “victim” out alongside the dog.

Buried volunteers also have tug toys with them, so they can reward the canine with a satisfying game. “You give the dog the feeling that they’re actually pulling the person out of the hole,” explains Burnett, who estimates that, within a year, rescue dogs should be able to quickly find someone under six feet of snow.

Old-hand avalanche dogs get thrown all sorts of extra curveballs and complex scenarios. “You want to make it as difficult as possible,” notes Burnett, so that an experienced canine continues to learn while having fun.

Helpers may shout, create distractions, or pour a bit of gas on the snow to mimic the smell of snowmobiles. Handlers will also hide objects, like articles of clothing that have fainter scents than live people. And then there’s cadaverine, a compound that smells like decaying flesh, which is sealed in a container and buried under several feet of snow.

After an intense day of training, the dogs and handlers head back to the patrol center. On their way home, a handler may snowplow slowly down the slopes, while the dog keeps pace behind the “V.” This shields the canine from other skiers and also helps maintain an easy pace to protect his hips and joints. There’s always the option of a swift ride back on a chairlift too.

After a high-protein dinner, possibly with an added fish oil supplement, it’s time for some much-needed doggie downtime.

In a real avalanche emergency, canines are among the most valuable members of the response team. One avalanche dog can cover more ground more thoroughly than two dozen people with probing poles. Someone trapped in the snow has a 90 percent chance of surviving in the first 15 minutes, but those odds drop to about 50 percent after half an hour.

Once the person has been dug out, the handler will praise and play with the dog — but if the victim has died, the situation must be treated carefully. “It requires a certain level of sensitivity,” says Burnett. “It’s a positive thing to find [the victim], but we might take the dogs someplace else to reward them, away from any family. Or we’ll have someone hide, so that we can get a live find to replace the unhappiness.”

In happy cases, when someone is found alive, the dog gets especially energetic praise and tug games. Often, the lucky “find” will want to meet the rescue dog afterward — the best reward of all.

Plus: Read about the rich search-and-rescue history of the Saint Bernard.