What Owners of Giant Dog Breeds Are Tired of Hearing 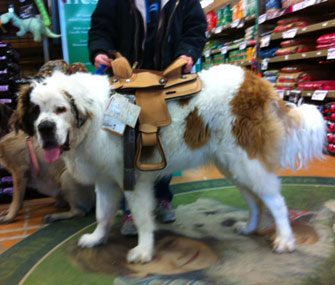 Toren Culver via Facebook
When people ask if this dog has a saddle, the pup's owner can reply that actually, yes, her canine does have one.

When you encounter a giant dog breed, it is quite a sight to behold. It’s hard to imagine that a dog can have such long legs, huge paws and, well, just be so big. But often, the first words that pop out of peoples' mouths at the sight of a Great Dane, Mastiff or other huge breed are the same old things that the dogs' owners have heard a million times — and would probably be happy tonever hear again.

So what should you avoid saying next time you see a big dog? We asked our Facebook audience which clichés about giant dog breeds they’re tired of hearing, and here’s how they responded.

Many people are quick to compare a giant dog to a small horse. While this may be funny the first time you hear a joke about it, after a while, it gets old. Facebook fan Sarah Jane Berry is over people telling her, “You should buy a saddle and ride him!” and Liz Schaff is tired of being asked, “Can you ride him?" She adds: "Argh!” Of course, sometimes it helps to turn a cliché into something that’s actually funny. Facebook fan Toren Culver, as you can see from the picture above, actually does have a saddle for her large dog. She writes, “No, I don’t have a saddle… No, wait. Maybe I do.” 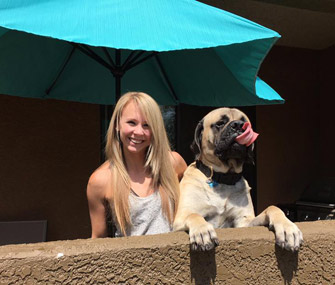 Sarah Jane Berry via Facebook
Owners of giant dog breeds have been asked "Who's walking whom?" more times than they can count.

Yeah, we get it; giant dogs often look like they’re walking their humans instead of the other way around. But that doesn’t mean you have to point it out. Several Facebook fans are sick of being asked, “Who walks whom?”

But there's another piece to this, and we think Maryse Acrvadis, whose female American Boxer is often mistaken as a male Mastiff, sums it up best: “Why do people assume that big dogs are male and women can’t take them for walks?” Yes, why indeed?


No, He Doesn’t Bite

There are plenty of negative stereotypes out there about large and giant dog breeds, and most of the time, they’re not true. Just because a dog looks intimidating doesn’t mean he acts intimidating. Facebook fan Nicole Hornback has a Boxer who's often mistaken for a Pit Bull. She’s tired of hearing, “Does he bite?” and “Is he going to hurt me?” But she’s come up with the perfect response: “You might drown from all the slobber from when he licks you!”

So there you have it: Giant dogs are not ponies, they are capable of walking on a leash without dragging their human behind them and they are more likely to lick your face than bite it. The next time you encounter a big dog, take our advice and go for the compliment instead of the bad joke — we're sure the dog's owner will appreciate it.

Are there any more clichés about giant dog breeds we’re missing? Share them in the comments below or on our Facebook page.