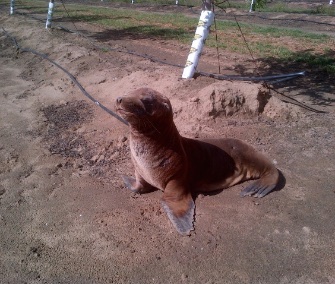 Eric Hopson, U.S. Fish and Wildlife Service
Hoppie was found miles from the coast, in an almond orchard near Modesto, California. He was brought to The Marine Mammal Center for rehabilitation.

The number of sea lion strandings in California has reached a record high of 2,250 so far this year. That means that if you’re living or traveling along the state’s coastline, there’s a much greater chance than usual that you’ll come across a pup in trouble.

The Cause of the Crisis

Stranded sea lions — most of them young pups — have been found on beaches and roadsides, in backyards and even in an almond orchard. The National Oceanic and Atmospheric Administration (NOAA) says the total number of strandings for the first three months of 2015 is more than 20 times the average level of strandings for the same period in the last 10 years.

Experts believe the crisis is the result of a shortage of the marine life that sea lions eat. Nursing moms have had to venture farther out to sea to find prey, leaving their pups for longer periods of time.

Thankfully, experts say they don't expect this year's record level of strandings to threaten the California sea lion population overall. NOAA estimates there are 300,000 of the animals along the Pacific Coast.

Still, rescuers have been busy responding to the strandings. There are several California centers taking the animals in for rehabilitation and release. The Marine Mammal Center in Sausalito has saved 771 sea lions this year and currently has 166 sea lions on-site. We checked in with them to find out what to do — and what not to do — if you find a sea lion.

The Most Important Ways to Help

Laura Sherr, the center’s public relations specialist, provided this information on the three most important things to keep in mind:

Other Things To Keep in Mind

You may think you can help the pup by pouring water on it, but that's something you should never do. Sea lions actually spend a lot of time out of the water and can survive there. 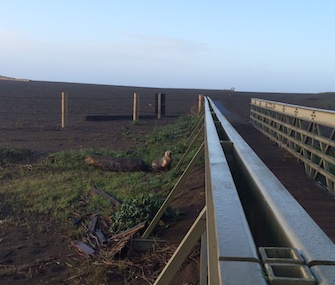 Also, don’t be tempted to take “just one cute selfie” with the sea lion. Although they’re cute, you would be causing them additional stress, because they’re not comfortable around humans. Under the federal Marine Mammal Protection Act, it is illegal to injure or disturb a marine mammal — and that applies even if someone is trying to help the animal.

NOAA representatives said last month that rescuers may not be able to get to every animal. Sherr also warns that with the large volume of stranded pups this year, it may take time for rescuers to arrive.

“During the current sea lion crisis, we ask that the public please be patient after reporting a stranded animal,” she says. “We are receiving dozens and dozens of calls each day and prioritizing response as quickly as possible. We are assessing every reported animal to determine whether a rescue is necessary.”

If you do call to report a stranding, there are some positive things you can do to help a stranded marine mammal and the rescuer. They include: watching the animal from a safe distance and keeping others away; describing physical characteristics like size and coloring, as well as its physical condition; looking for any obvious identification tags or markings; and providing detailed and accurate location information.