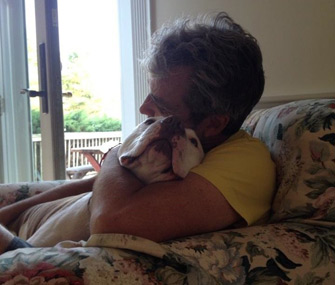 There's a gorgeous and compelling article that Esquire magazine published this week, and we couldn't resist sharing it with you. Tom Junod, Esquire's longtime writer at large, composed a deeply personal opus on Pit Bulls that is absolutely worth a read.

We won't spoil it for you, but the crux of the piece questions why the Pit Bull, which Junod calls "the dog in whose face we see our collective reflection," is euthanized at a rate that could be as high as 3,000 dogs a day. "The State of the American Dog" draws on Junod's reflections of his late Pit Bull, Carson, and his current one, Dexter. Here's one of our favorite parts:

"The demographic shifts that are transforming America's human population find a mirror in the demographic shifts that are transforming America's canine one, with the same effect: More and more we become what we somehow can't abide. We might accept pit bulls personally, but America still doesn't accept them institutionally, where it counts; indeed, apartment complexes and insurance companies are arrayed in force against them. And so are we: For although we adopt them by the thousands, we abandon them by the millions. The ever-expanding population of dogs considered pit bulls feeds an ever-expanding population of dogs condemned as pit bulls, and we resolve this rising demographic pressure in the way to which we've become accustomed: in secret, and in staggering numbers. We have always counted on our dogs to tell us who we are. But what pit bulls tell us is that who we think we are is increasingly at odds with what we've turned out to be."


You can read the full article here on Esquire.com.