What You Should Know About Elephants at Risk 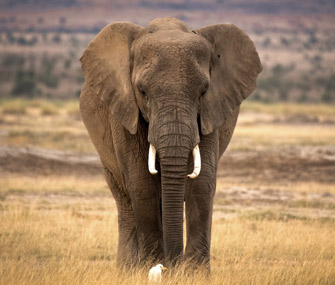 If you've ever dreamed of taking an African safari, you'd better hurry: Elephants may soon be gone. Illegal killing of thestately, intelligent animals is on a dramatic upswing as many recent news reports have documented. If the pace isn’t slowed, many leading conservationists fear that elephants could become extinct within the decade.

Despite international bans and restrictions on ivory trade, tens of thousands of African elephants are killed each year by poachers who want ivory, whichis primarily sold to China, Taiwan, Thailand, Vietnam, the Philippines and, surprisingly, the United States, among others. Though estimates vary, most wildlife experts believe approximately 500,000 elephants remain today in Africa. With poaching rates spiking up to 40,000 animals per year, it might not be long before elephants disappear.

The recent rise in elephant poaching incidents and ivory seizures has prompted the United States, many individual states such as New Jersey and New York, and other nations to revisit their complex laws and policies regarding ivory (e.g., what defines “antique” ivory—ivory on musical instruments,weapons, etc. that is acceptable to own and sell). And though many African countries prohibit trophy hunting of elephants, some still allow it. Even the new U.S. regulations regarding ivory that were enacted in February allow hunters to import two elephant “trophies” annually. So while Kenya struggles to protect its elephants, farther to the south, in Zimbabwe, elephant trophy hunters are welcomed. And on the other side of the world, China licenses ivory-carving factories and sellers, and even offers ivory-art-carving courses at a national university.

Even “Famous” Elephants Are at Risk

In June, the international conservation community mourned the loss of one of the more famous wild elephants in Africa — Satao, a large male elephant “tusker” who lived in Kenya’s Tsavo National Park (tuskers are bull elephants with huge tusks). Poachers tracked down the wily old elephant beloved by many — whom wildlife agents had for years tried to protect — and killed him for his tremendous tusks. His death attracted international media attention and galvanized the conservation community.