What's the Deal With... My Dog's Weird Reverse Sneezes? 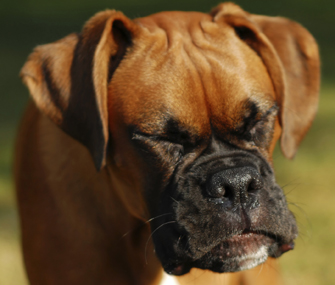 Dogs tend to be resilient creatures, but when the pups we love make odd, wheezing-like sounds while reverse sneezing, it’s hard not to worry about what's happening to them.

So we decided to get the inside scoop on the curious canine phenomenon from a pair of experts: Dr. Richard Joseph, DVM, DACVIM, medical director of New York’s Animal Specialty Center, and Dr. Mark Hiebert, medical director of the VCA TLC Animal Hospital in Los Angeles.

What Exactly Is a Reverse Sneeze?

According to Dr. Joseph, a reverse sneeze — also called a “backward sneeze” — is characterized by the "sudden onset of a dog extending his head and neck and making rapid inspiratory movements with the mouth closedthat results in noises coming from the nasal passages."

Although the alarming episodes typically lastonly seconds, they can feel like a lifetime to some owners — especially if they're witnessing it for the first time.

But why does it happen?

Dr. Hiebert notes that dogs either sneeze normally or reverse sneeze depending on where the irritation occurs in their noses. "A reverse sneeze, like a [regular] sneeze, is a reflex, but instead of a rapid expulsion of air through the nostrils, it is a rapid . . . inhalation," he says. "It is loud, so people often [think] that their dogs are having an asthma attack. Dogs don't have asthma attacks, so it's usually suggestive of reverse sneezing."

Is There Any Reason to Be Concerned?

Just like a cough or a normal sneeze, a reverse sneeze is designed to expel whatever irritant has triggered it, Dr. Hiebert says. And like a regular sneeze, the occasional reverse sneeze is considered perfectly normal.

According to Dr. Joseph, in some cases, repetitive reverse sneezing could stem from irritation of the nasal and pharyngealpassages due to a chemical irritant or an allergic reaction. The culprit could also be a foreign material that's stuck to the back of the nasal area, known as the retropharynx, such as a blade of grass. If you suspect any of these causes, contact your veterinarian.

Some dogs start reverse sneezing at a young age and continue to do so on occasion throughout adulthood. But if the reverse sneezing starts later in life, increases in frequency and severity or is accompanied by other nasal signs, like unusual discharge, then you should consult your veterinarian.

What Can I Do to Help My Dog?

To help shorten a reverse sneeze episode, Dr. Joseph suggests gently massaging the throat area. Dr. Hiebert adds that you can also gently blow into your pet's nose or encourage your dog to drink water. Ultimately, the reverse sneeze should subside on its own.

For answers to other curious questions about animals, check out our other "What's the Deal With . . ." stories.