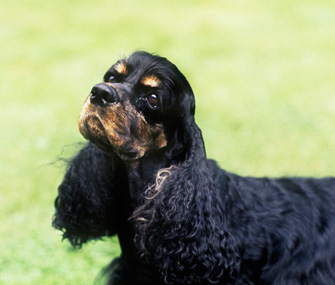 Sally Anne Thompson, Animal Photography
It's hard not to fall in love with the Cocker Spaniel's expressive eyes and long ears.
The beloved Cocker Spaniel is a popular pup and for good reason. He’s playful and often considered a good dog for families due to his typically loving and gentle nature. Learn more about this sweet guy and see if he might be the right dog breed for you.

Typically a friendly guy, the Cocker Spaniel is capable of getting along with children, as well as other dogs and cats. Just keep in mind that he can be a bit shy around strangers and may need a little time to warm up to them.

They can be easy to train.


The Cocker Spaniel is usually highly intelligent and trainable and often appreciates learning new tricks and commands. It's important to socialize him from a young age and to train him with positive reinforcement techniques, so he doesn't develop obnoxious levels of barking, digging or other undesirable behaviors.

They’ve got great hair — but it tends to need some maintenance.


They tend to enjoy a workout.

Though he usually doesn't need hard-core exercise the way some breeds do, this Sporting dog does need to burn off some steam every day. He’ll probably enjoy taking a walk or playing fetch with you. He’s also capable of a variety of dog performance activities, including hunt tests and agility.

They’re the smallest breed in the Sporting Group.

If you're looking for a relatively small dog who can be just as active and athletic as larger breeds, then you may want to consider the Cocker Spaniel. He typically stands 14 to 15 inches at the shoulder and weighs 20 to 30 pounds.