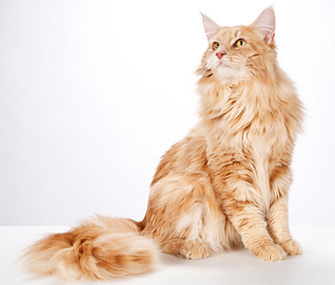 The Maine Coon is a popular cat — the breed ranks third among those registered by the Cat Fanciers' Association. And it’s no wonder: This big guy is typically intelligent, sweet and loving. Plus, he usually gets along with children as well as other cats and dogs. Learn more about this gentle giant to see if he could be the right breed for you.

Considered one of the largest cat breeds, the Maine Coon is muscular and big-boned and typically weighs 9 to 18 pounds. These cats don’t stop growing until they’re between 3-and-a-half and 5 years old.

Sure, Maine Coons tend to meow and purr to communicate. But they also cheep, chirp and trill, and they know how to use body language to get their point across. You just might get a loving head butt if this sweet guy wants to tell you how much you mean to him.

This is usually an affectionate, easygoing cat who typically gets along well with everyone, from dogs to other cats to kids. He usually likes to play fetch and may even be willing to learn to walk on a leash.

The Maine Coon is likely the oldest cat breed native to America and was first recognized as a specific breed in Maine, where he also happens to be the official state cat. The first mention of a Maine Coon was in 1861. Many could be seen at cat shows — which were new at the time — in Boston and New York.

The Maine Coon has a shaggy, heavy, silky coat. It rarely mats and typically just needs weekly combing to care for it.