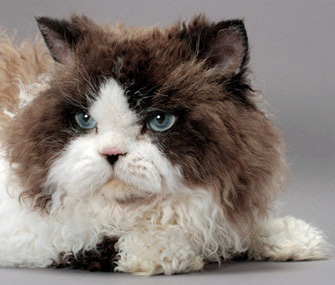 Tetsu Yamazaki, Animal Photography
If you want to pet the Selkirk Rex's unique curly coat, you're in luck — the breed usually likes affection.

This cool cat stands out in a crowd with his curly fur, distinct round head, round eyes and muscular frame. He tends to be tolerant, patient, affectionate and loving. Plus, he's often more than happy to hang out in your lap. Learn more about the Selkirk Rex and whether he might be the right cat breed for you.

They can get along with kids.

Generally gentle and tolerant, the Selkirk can be a good choice for families with children. He can also get along with other pets and usually isn't wary of frequent guests and visitors. He can even make an excellent therapy cat if he's been well socialized.

The Selkirk tends to be easygoing and has a moderate activity level. Though he’s no couch potato, he usually won’t wear you out. He probably won’t be pesky about wanting attention all the time, but he also won’t be happy if he’s frequently left alone or ignored.

If everyone you meet wants to touch your Selkirk Rex’s curly coat, you’re likely in luck — he tends to be friendly and tolerant, and probably won’t mind.

All About the Selkirk Rex

They tend to be smart.

Don’t be surprised if you catch a Selkirk opening drawers or doors. Keep him intellectually stimulated by teaching him tricks and giving him puzzle toys that will reward him with kibble or treats.

Their coats come in two lengths and a variety of colors.


The Selkirk Rex comes in many colors and patterns, including pointed, and his coat can be short or long haired. You may hear that his coat is hypoallergenic because of its texture, but that’s not the case; allergies aren’t caused by a particular coat type but by dander (the dead skin cells shed by all cats), saliva and urine. It's also important to note that not all Selkirk Rex cats have curly coats; some can have straight coats.