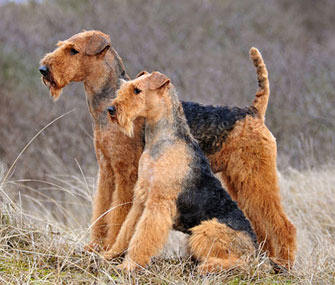 Often called "the king of terriers" by his fans, the Airedale Terrier tends to do everything in a big way, from loving his family to playing to making mischief. Learn why this might be the right dog breed for you.

They can be characters.

Typically independent, clever, charming and stubborn, the spirited Airedale tends to live life to the max. He'll often play games with the same enthusiasm that he may use to dig in your garden or chew your sofa. So it's important to channel his energy toward activities that won't get him in trouble.

The Airedale can be a busy guy. He tends to be athletic, with a lot of energy and endurance. Like many terriers, he often likes to chase, dig and bark.

They’re large and in charge.

The largest of the terrier breeds, the Airedale generally weighs between 40 and 65 pounds and stands 21 to 23 inches at the shoulder. He was one of the first breeds trained for police work in Germany and Great Britain and worked as a guard and messenger dog in World War I.

They can be good watchdogs.

If you're looking for a dog who might protect your family, the Airedale can be a good choice. He's usually friendly with his owners and other people he knows, but can be wary of strangers and aggressive with other dogs.