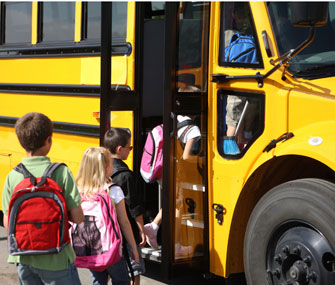 After the fun and playtime of summer vacation, fall can be tough on dogs who've become used to having the kids around. For some dogs, the household changes that accompany a school-year routine —particularly the absence of familyfrom the house all day — may be distressing, triggering bouts of destructiveness.

If your dog seems stressed about thedisruption, there are ways you can minimize his anxiety and soothehim when he isalone.

Give your dog his most substantial meal (and probably a walk) before he's about to spend his biggest chunk of time alone. Dogs often nap after they eat, so he may snooze away much of his time alone. Another trick is to use food puzzles when you feed your dog. He may be so engaged trying to get to the food that he doesn't notice everyone leaving.

Have a really good chewy that's just for his alone time and hand it to him as you and the children leave the house. Similar to feeding your dog his meal using food puzzles, a chew toy is a great way to keep your dog focused on something other than your departure. Just make sure the chew toy is safe to leave with the unattended dog. Stuff a Kong toy with a little peanut butter and let him have at it. Digging out the good stuff will keep your dog busy, relieve him of some of that excess energy and help him over the worst part of his separation from the family — the beginning.

Don't let your dog shadow you at home. All that devotion is wonderful and it feeds our human egos, but it makes matters worse when you leave. If you have a dog who isn't happy unless some part of him is touching some part of you, encourage his confidence and independence by practicing long "down-stays" (periods of time when he is lying down, and staying down, on command) on the other side of the room every night. Build up to 30 minutes as you watch TV — you on one side of the room, him on the other. Don't forget to praise him for staying.