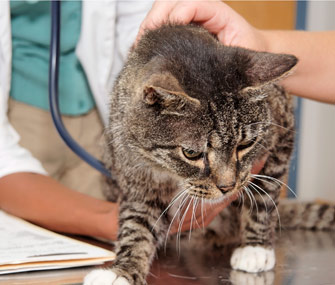 October is National Breast Cancer Awareness Month, and according to the American Cancer Society, breast cancer is the leading cause of cancer death in women.

In 2011, nearly a quarter million cases of invasive breast cancer were diagnosed in the United States — and close to 40,000 deaths occurred.

Breast cancer is an equally important disease in dogs and cats: It is the most common tumor found in female dogs and the third most prevalent tumor detected in cats. Even wild cats can develop the disease — in a study that looked at captive lions, leopards and tigers, 11 out of 26 of these animals had breast tumors.

How Cats and Dogs Compare to Humans

Reproductive status impacts the development of breast cancer in both humans and animals. For example, women who've had their first child late in life have a greater risk of developing the disease.

Spaying dogs before their first heat cycle decreases the risk of breast cancer. And while the same data isn't available for felines, one of my patients, Nellie, is a typical case of a cat suffering from breast cancer — she was spayed as a mature cat after she found a forever home, and she may have mothered a litter of kittens while homeless.

For dogs, cats and humans, the mainstay of treatment for breast cancer is surgical excision of the tumor. The tissue is then submitted for a biopsy to determine if further therapy is necessary. Nellie's surgery was performed by her neighborhood veterinarian, and she came to me because a “bad” biopsy indicated that she needed chemotherapy.

Currently, veterinary oncologists do not routinely screen their patients’ biopsies for hormone receptors, but based on scientific research, the majority of breast tumors in dogs and cats lack hormone receptors.

What Your Vet Will Do: Diagnosis and Treatment Options

Other than a physical examination, there are no routine breast cancer screening tests for dogs and cats. A recent study has suggested that mammography and ultrasounds for dogs produce similar results to humans, but the acceptance of mammography as a routine screening test is yet to come.

Finding a breast tumor in a pet leads to a cascade of tests and evaluations. In Nellie's situation, since these tumors can spread to the lungs, she received a chest X-ray to determine if this was the case. Nellie’s veterinarian also ran routine blood tests to determine if contraindications to general anesthesia existed, since surgery was recommended.

Veterinary oncologists will often suggest radical mastectomy, which involves removing the chain of breast tissue along the chest and abdominal walls. The procedure differs from the human version in that the underlying muscle isn't removed.