Home ›
Our Pet Experts ›
Dr. Wailani Sung ›
Why Does My Cat… Always Like to Curl Up in Small Places?

Why Does My Cat… Always Like to Curl Up in Small Places? 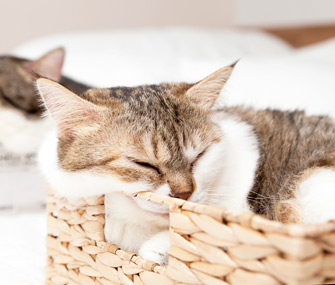 Thinkstock
Cats often sleep in small spaces to protect themselves from predators.

Have you ever wondered why your cat likes to curl up in bowls, boxes and other small places?

This propensity among domestic cats is most likely an instinctive behavior that is hardwired in their brains. We often think of our cats as accomplished predators of small prey, like birds and mice, but it’s important to realize that they themselves are often prey to larger predators, such as coyotes, foxes, eagles, hawks, owls, etc. As such, a cat who is curled up is protecting the softer, more vulnerable part of his body — the abdomen. There are a lot of vital organs in the abdomen, and an injury in that area can be detrimental and even fatal to the cat. Also, sleeping with the limbs close together and in a more compact position makes it easier and quicker for the cat to get his legs underneath him in order to either run away or attack. When an animal is lying on his side, it takes more time to turn the body upright and get his limbs beneath him for any defensive or flight behavior.

Choosing a small location to curl up into also may make the cat feel like it is easier to keep an eye out for intruders or predators, especially if the space is hidden or up high. It is also more difficult for larger predators to attack the cat if he is in a small location. In general, cats only tend to sleep sprawled out on their sides when they are in a comfortable, protected environment, such as inside their homes. However, if your cat likes to sleep curled up in small places, it does not necessarily mean he does not feel safe. Just as some people like to sleep in a certain position, the same applies to cats. They may choose their sleeping positions and locations based on where they are and how they are feeling. If your cat seems to be blissfully curled up in a bowl or a box, it is likely the same as you curled up in your favorite jammies on your favorite chair.