Home ›
Our Pet Experts ›
Dr. Wailani Sung ›
Why Does My Cat... Groom Excessively?

Why Does My Cat... Groom Excessively? 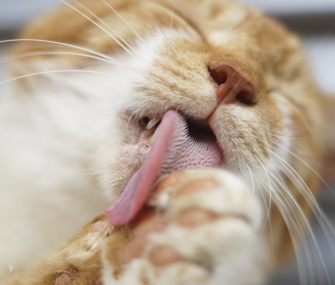 Thinkstock
Cats groom themselves to remove debris off the fur and to help regulate their body temperature.

If it seems like your favorite feline spends most of his waking hours grooming himself, you are probably right. Cats typically spend anywhere from 15 to 50 percent of their time grooming themselves, and this is considered normal behavior for them. It’s also important to realize that grooming fulfills more than one function in their lives. Though most owners can guess the first — that your cat’s tongue and saliva are used to remove debris off the fur — many often don’t realize the second reason. When your cat’s saliva is distributed over his body on a warm day, it helps with thermoregulation in order to keep him cooler! Grooming may also be a self-soothing behavior for some cats and a sign that they are feeling comfortable in their environments. On the other hand, some cats groom when they are nervous and do not feel comfortable: Grooming may be a displacement behavior;cats would prefer to focus on grooming rather than deal with the stressor.


Cats also seem to pay more attention to certain areas of the body versus others. Areas that are most commonly groomed by cats are the face, neck, chest, shoulders and front paws. The face and paws are most often groomed to remove food and other materials that may interfere with your cat's sense of smell or his ability to “feel” using the whiskers. Substances on the paws also may be irritating to your cat — similar to how we would feel if our hands were covered in mud or clay. Areas cats may be less likely to groom include the belly, rear legs, back, tail and perianal areas. These areas may be difficult to reach. They also may require the cat to divide his attention away from watching his surroundings, which he may be reluctant to do.

There are also certain patterns to a cat’s grooming behavior. For example, most cats often groom their faces after eating. This helps clean up any stray food particles stuck to the face or whiskers. After using the litterbox, your cat may also lick his paws to remove litter particles caught in the paw and clean his perianal area. These again are all normal grooming patterns.

When Should I Be Concerned?

Sometimes, however, excessive grooming behavior in particular areas of the body can be a sign of a medical problem, such as fleas, allergies, infections, anal gland impaction, skin disease, pain, etc. A visit to the veterinarian is in order to rule these problems out, as in some cases, it can be a tip-off that something is seriously wrong. For example, if a male cat sits on his hindquarters in similar fashion to a bear and directs a lot of licking behavior toward his penis, this may be a sign that he has a urinary blockage, which can be a fatal condition in male cats. A cat who cannot urinate can become really sick and die, so this behavior warrants an immediate call to your veterinarian and a visit to the emergency clinic if your local veterinarian is unavailable. Cats with bladder infections also may lick excessively around the genital area due to irritation from the infection.

Excessive licking can produce areas of thinning or missing hair in the haircoat, as well as redness and skin irritation. So these are additional signs that something is amiss. If medical conditions are ruled out, your veterinarian may recommend an evaluation by a veterinary or animal behaviorist, as some cats may groom excessively due to a behavioral disorder. Sometimes the behavior may be so intense that the cat may bite at himself or pull out mouthfuls of fur. Behavioral disorders will need to be closely monitored and managed to keep your cat from further harming himself. A treatment plan will need to be implemented, and in certain cases, medication options may need to be discussed.

So keep in mind that though regular grooming is normal for cats, excessive grooming — especially if this is a sudden change from your cat’s normal behavior or if he seems to be focusing on a particular area — deserves investigation. If you have a concern, a call or visit to your veterinarian may be in order. Otherwise, it might just be that your favorite feline simply enjoys washing his whiskers!