Home ›
Our Pet Experts ›
Linda Fiorella ›
Why Does My Cat... Not Show Her Age? 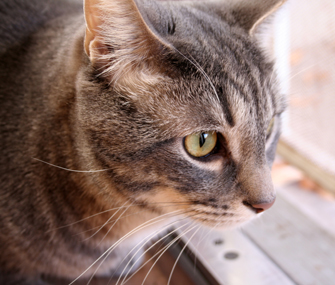 While most dogs start to show their advanced age by the gradual graying of their snouts and paws, it seems that the majority of older cats somehow hang onto that kittenish glow.

According to Dr. Marcus G. Brown, DVM, of the Capital Cat Clinic in Arlington, Va., some felines do go gray, but it typically happens much later than it does in dogs — and not as intensely.

“It is felt that cats may have more melanocytes [cells that produce pigment in skin and hair] than dogs,” Dr. Brown says. “Cats are very old when they gray, usually around the age of 17.”

And the amount of gray hair doesn't reflect how active or healthy your kitty is — it's only related to melanin, Dr. Brown adds.

So How Do Cats Show Their Age?

“You can see it in their eyes to some degree,” Dr. Brown explains. “There is a normal graying of the lens called nuclear sclerosis, which does not affect vision.”

Another visual sign of aging in cats with kidney disease and other diseases is a decrease in muscle mass, while a less visible sign of normal feline aging is hearing loss.

In other words, maybe senior kitties benefit from all that beauty sleep.