Why Does My Dog... Always Lick Me? 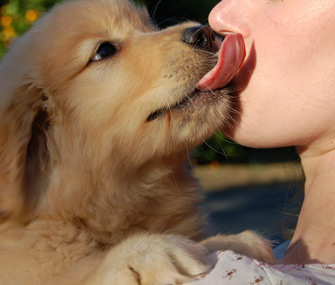 It’s not much of a conundrum, really. The bottom line is that most of the time, dogs will lick their people as a sign of affection. “You are the sun and the moon,” their silky tongue would have you know. “And guess what? You taste good, too!”

But much as barking can be, licking is also a multi-faceted tool that seems to play many roles in canine behavior and, consequently, tends towards many different interpretations. Here’s a list of the many ways in which we homo sapiens have come to understand this culturally alien mode of communication: Licking is a natural instinct in canines. When a mother licks her pups and her pups lick each other during the course of grooming and other social interactions, we’re observing quintessential licking behavior in dogs. Indeed, this behavior is held up as one that may serve as the basis for all other licking decisions a dog makes. (“Mom licked me now I lick you ...”)

But what happens when extreme licking happens?

Extreme licking tends to be defined not so much by the dog as it is by the human beholder of the behavior. As such, any unwanted display of lingual attention –– even just a couple of polite laps every so often –– could be construed as excessive. In these cases it’s considered more of a human problem than an animal problem. After all, dogs will lick. It’s in their nature.

Nevertheless, dogs can be trained to turn the tap off, so to speak. Finding a veterinary behaviorist or certified dog trainer to aid in this process is strongly recommended.

Of course there are those times when licking may take on abnormal tones. Dogs who suffer certain types of obsessive-compulsive behaviors may manifest these as excessive licking. Typically, however, dogs affected by these behavioral disorders will turn to objects –– or more often, themselves –– by way of displaying their outsized penchant for licking.

All dog owners observing this behavior are encouraged to seek out the assistance of a veterinarian or veterinary behaviorist for assistance. Many of these patients can be treated successfully so that their life might include more than what they might find at the end of their tongue.