Home ›
Our Pet Experts ›
Dr. Wailani Sung ›
Why Does My Dog… Bury Bones?

Why Does My Dog… Bury Bones? 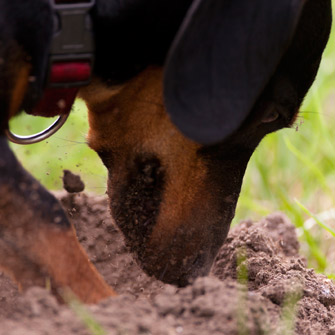 Thinkstock
Does your dog bury bones, toys or other items? His wild ancestors might be to blame.

Have you ever wondered why your dog likes to bury his bones? Sometimes this behavior can be annoying, especially when his hiding places happen to be a flower garden or under your couch cushions. But there is likely a method to his "madness."

Many species of animals exhibit caching — or burying — behavior in regards to food items. Certain species of birds and squirrels, for example, are renowned for their amazing memory and ability to retrieve hidden items. In these species, it is important for the bird or squirrel to bury his food in the warmer months of the year so he can dig up his supplies in leaner, winter months when food is scarce.

Some dogs also exhibit this same behavior — burying favored treats where they are likely to find them again. This behavior may have developed due to strong survival instincts inherited from their wild ancestors. Dogs, as you know, have evolved from wolves, which live in packs and work together to hunt larger prey animals. In times of plenty, when they are able to bring down a large animal, such as a moose or elk, wolves tend to gorge themselves. When there is plenty of food to go around, wolves may feast for several days. Once the prey animal has been consumed, however, wolves may go days without eating a substantial meal. As individuals, they may hunt smaller prey animals, such as rabbits, but often these meals may not provide enough nourishment to replace the energy needed to hunt and chase the prey down, especially if the prey animal is lean or small. The behavior of burying valued food items may have developed from the need of these ancestral wild canines to store energy-rich food for later consumption. A wolf who could remember where it buried food items could dig them up and later ingest those items and probably survive the winter.

This behavior may persist in our domestic dogs. And though you should never feed your dog real bones, because they can splinter and cause injuries, many dogs enjoy rawhide or other bone-like chew toys. They may sometimes bury these "bones" or any other items they may perceive as "high value," such as certain toys or maybe their owner's shoes or clothing items. They may think that these interesting items are worth saving in case they never get those items again. So, this may explain why your dog buries bones, toys or other unusual but "treasured" items in your flower bed or couch.