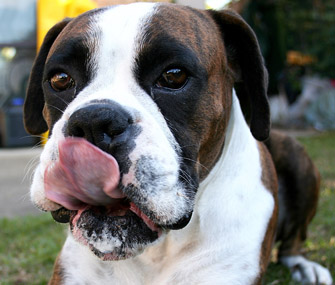 All dogs salivate to cool down, but if you have a pup with big or open lips — such as a Boxer or a Bloodhound — you know that these breeds tend to be more drool-y than others.

“Saliva pools in their cheek pouches, and when they shake their heads, the drool flies,” says Dr. Ann Hohenhaus, DVM, DACVIM, a staff veterinarian at the Animal Medical Center in New York City.

And while you can wipe down the dog’s face to minimize the mess, there’s no way to prevent it — dealing with drool is just part of caring for your pet.

When Drooling Could Signal a Heat Emergency

In the summertime, sudden drooling may be a sign of heatstroke, says Dr. Hohenhaus. If temperatures are high, and your dog is panting and appears fatigued, get her into the shade or air conditioning immediately, as well as offer her a cool drink of water.

If she's struggling to breathe, it's a bona fide emergency, says Dr. Hohenhaus — and you need to head straight for the nearest animal E.R.

While some nondroolers will salivate more when nervous — like when they're at the vet — excess drool, in general, isn’t indicative of a health problem, unless it’s unusual for your dog.

Dental problems, like periodontal disease and tooth abscesses, can cause some dogs to drool. A new drooling condition could also be a sign of disease or a health problem that’s preventing the dog from swallowing her saliva. Dr. Hohenhaus recommends taking a normally nondrooling dog to the vet at the outset of extreme salivation.

“It could be a sign of a neurological condition, in which the nerves in the face don’t work, or a blockage in the esophagus caused by something like a bone,” says Dr. Hohenhaus, adding that symptoms like gagging and retching should be considered urgent.

Another possible cause: mouth irritation. If your pup got into something unsafe, such as chewing an electrical wire or a noxious plant, her mouth could be irritated from electrical or chemical burns. Contact your vet if the drooling persists or if she repeatedly paws at her mouth.