Home ›
Our Pet Experts ›
Linda Fiorella ›
Why Does My Dog... Drop to the Ground When He Sees Other Dogs?

Why Does My Dog... Drop to the Ground When He Sees Other Dogs? 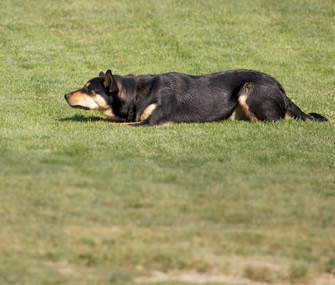 Dropping to the ground is "a play solicitation,” says Sharon Crowell-Davis, DVM, DACVB, professor in the College of Veterinary Medicine at the University of Georgia. Dogs use body language, including several play solicitations, to communicate their intentions.

“One of [these solicitations] is to just drop to the ground, and one of them is what we call a play bow where the fore quarters go down and the hind quarters are sticking up in the air,” explains Dr. Crowell-Davis. “Another is to raise one fore paw either while standing up or in the play bow, and wave it at the other dog — those are all forms of inviting the other dog to play.”

Problems can arise when another dog doesn’t recognize the meaning behind the gesture. “Both dogs and cats are social species, and this means they’re born with the capacity to learn the appropriate species-specific social behavior and appropriate social responses of their species, but they’re not born knowing all of it,” says Dr. Crowell-Davis. Due to this learning curve, Dr. Crowell-Davis stresses the importance of puppy socialization classes and ensuring that your puppy has pleasant experiences with others of its species early and often.

A dog that lacks significant social experiences may be clueless about what a play bow means and could respond with fear, and may even attack the dog that has performed the play solicitation. “But if you have dogs that have grown up with other dogs and have learned dog signaling, dog language and dog etiquette (a dog knowing that if one dog does this, I’m supposed to respond that way), then when one dog does a play solicitation, the other dog would know to play back if they feel like playing.” Or, she adds, maybe the dog doesn’t feel like playing, in which case he’ll ignore the play bow or just lie down.

Another potential source of conflict arises when, for example, there is a juvenile dog in the house who likes to play a lot and an older dog who’s fine playing sometimes but not always. “We might have the younger dog coming up and soliciting the older dog, and sometimes the older dog will play and other times it’ll just stare," says Dr. Crowell-Davis. "The younger dog has to learn to back off.”