Home ›
Our Pet Experts ›
Linda Fiorella ›
Why Does My Dog... Go to People Who Don't Like Pets?

Why Does My Dog... Go to People Who Don't Like Pets? 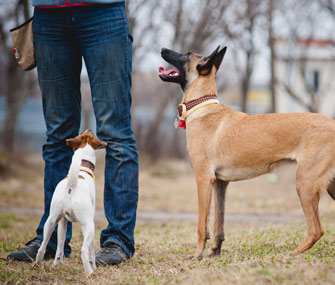 Believe it or not, not everyone loves dogs. But why do dogs seem to completely ignore the discomfort of the dog-phobic and trot right up to them?

Sharon Crowell-Davis, DVM, DACVB, professor in the College of Veterinary Medicine at the University of Georgia, has occasionally heard people say that they aren’t comfortable with dogs yet dogs always head straight toward them — but she thinks that in most cases this “is as much or more about human perceptions as about reality.” She explains that friendly dogs who are well-socialized to humans will approach a variety of people. Someone who is disconcerted by the canine’s interest will be more aware of the dog’s approach and think it’s done on purpose.

Still, there are a few circumstances that can cause some dogs to choose to interact with certain people and avoid others, Dr. Crowell-Davis says. “If the dog grows up only exposed to women, for example, it may be more comfortable with women than men, and so this can produce some selectiveness in the type of person the dog will head toward,” she says.

And, Dr. Crowell-Davis notes, a person’s indifference to dogs could actually make that person more attractive to certain pups. Those dogs who have been well-socialized to humans but remain a bit sheepish often prefer people who hang back rather than those who are more assertive and friendly. Because dogs are so good at reading the body language of each other and of humans, they can spot who’s going to be more or less enthusiastic with them and then choose whom to approach accordingly. “If the dog is a little bit timid of people and doesn’t like people to reach down toward it and pet it and roughhouse it,” she says, “that dog would probably be more comfortable with a person that doesn’t like dogs and who just sits there or stands there.”

It makes perfect sense, even more so when Dr. Crowell-Davis puts it into a human perspective. “It’s comparable to a human social situation where you’re with people you’re familiar with and you’re fine with people coming up and saying hi, but you don’t want people coming up and hugging you and grabbing your shoulders and saying, ‘How have you been doing all these years?” Dr. Crowell-Davis explains. “And a lot of dogs don’t like the latter kind of interaction, but that is often what dog lovers do to dogs.” And, just like people, some dogs love that kind of attention, and some dogs don’t.

Read more Vetstreet "Why Does My Dog..." articles: