Why Doesn't My Cat... Jump Anymore? 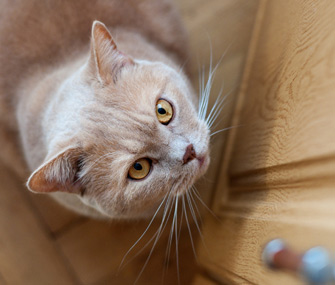 Thinkstock
If your cat's not jumping up on counters and furniture like he used to, it could be a sign he has arthritis.

I once knew a cat named Jenks who loved getting on the counters. He was as curious as they come, as evidenced by the toppled vases, nibbled-on leftovers and clingy bits of cat hair all over the place. He particularly loved knocking his mom’s sunglasses onto the floor and batting them around. It drove his owner nuts, but every attempt at shooing him away seemed to make him even more interested in jumping up every chance he got. The only difference over time was that once he figured out she didn’t want him doing it, Jenks waited until she left the room before he went on his walkabouts.

Over time, Jenks’ mom learned to accept his acrobatic nature for what it was, and instead of scolding, she just kept her valuables out of the way. The first time she accidentally left her sunglasses out on the counter and found them exactly where she left them, she cheered her good luck. The second time, she chalked up to coincidence. But by the third time, she scanned the counter for cat hair and realized there was none to be found. Jenks had given up on his jumping habit, and her cause for cheer became a possible cause for concern.

It isn’t always easy to ascertain whether or not a cat has stopped jumping, since it’s often an intermittent behavior to begin with. If the jumping is associated with a normal routine, such as a cat who normally sleeps on the bed or one whose dish is in an elevated location, it becomes apparent more quickly, but often it is a gradual realization.

The most common reasona cat may no longer jump as often or as high as he used tois pain, particularly in older cats. It’s the same reason you see kids flipping around on monkey bars while those of us with a few more miles on the odometer watch from the park bench — aging takes its toll on our joints.

The reason arthritis is so underdiagnosed in cats is not because it’s challenging to diagnose — a good examination and X-rays often do the trick. It’s that cat owners aren’t recognizing the signs of chronic pain that send them to the vet in the first place. The signs are subtle, and by subtle,I mean you really have to know what you are looking for because you’ll miss them otherwise. Here are some of the most common signs of feline pain:

Aside from osteoarthritis, other painful conditions can also lead to a reluctance to jump. Injuries, infections, inflammatory conditions and tumors are just a few of the many potentially painful conditions in felines. The bottom line is any of those conditions warrants a prompt veterinary visit. Despite cats’ proclivity to hide their illnesses, their pain can be very real and very significant.

Is it possible that a cat can have an entirely clean bill of health and still stop jumping? Sure, cats can learn to avoid jumping to particular locations. We often use this to our advantage to dissuade problem jumping, such as the owner I knew who lined her windowsills with tinfoil, because her cat hated the crackly feel on her paws. My own cat stopped jumping into our sink when I finally relented and brought home her very own feline drinking fountain.

In Jenks’ case, his owner brought him in to see me as soon as she recognized something was off. We diagnosed him with osteoarthritis exacerbated by being a couple of pounds overweight, two common conditions in seniors. She started him on a diet and cat-appropriate medication to get him back on track.

Three months later, Jenks was off the meds and back on the counters. “I’m beginning to regret fixing this problem,” she said with a wink, but we both knew she was teasing. Few things feel as good as helping your pet live a long and healthy life, even if you do lose a pair of sunglasses every now and then.