Home ›
Our Pet Experts ›
Mikkel Becker ›
Why Is My Dog Friendly With Some Dogs and Crabby With Others?

Why Is My Dog Friendly With Some Dogs and Crabby With Others? 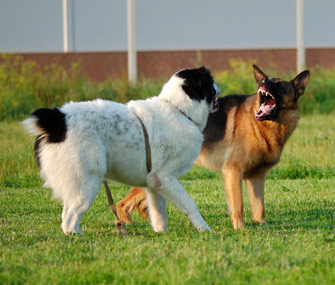 Q. When we’re out on a walk, my dog is friendly with some dogs we see but standoffish with others. What’s going on?

A. There are many reasons why some dogs will upset your pooch while others won’t. Your dog’s reaction could be the result of past experiences or a reaction to the other dog’s behavior — or it could be triggered by cues you are sending. It’s important to identify the possible causes of this behavior in order to better understand why your dog is acting the way she is.

The size of the other dog may be a trigger for your pup. Most dogs are more likely to be intimidated by a larger dog than by a smaller one, and the reaction may become more pronounced as the size of the dog increases. The opposite can be true as well, though: A dog who has little experience with small dogs, or who has had a negative encounter with one in the past, may react with fear or aggression to a dog half her size.

Certain physical characteristics may contribute to your dog’s unfriendliness as well. Flat-nosed dogs, like the Boxer, Bulldog, Pug and Boston Terrier, and dogs with docked tails, like the Doberman Pinscher, are less able to use body language to communicate with other canines because of their shortened snout and tail. Dogs with naturally higher tail carriage, such as Chows, Akitas and Huskies, may also be misunderstood by other canines because holding the tail high can be seen as a sign of aggression.

If your dog has any of these types of features, be aware that other dogs may react strongly to her simply because of her body composition. Alternatively, your dog may be more reactive to these types of canines because they are difficult to read and may inadvertently communicate a threat.

Prior experiences with dogs of different breeds, sizes, colors or facial features can also make a difference in your dog’s response to another canine. If a dog has been attacked or bullied in the past, she may perceive canines who look or move like that dog as a potential threat and may act fearful or aggressive when she meets them.

A lack of experience can also contribute to your dog’s behavior. A dog who has not been exposed to a variety of play styles as a puppy may become nervous when another dog displays unfamiliar — and therefore intimidating — behavior. For instance, a Border Collie’s natural play behavior is distinctly different from that of a Pit Bull: The Border Collie is more likely to herd in play, while the Pit Bull may use more body slams and paw taps. This unfamiliar play may make your dog nervous and crabby.

The other dog’s behavior may influence your dog as well. A dog who is pulling on leash toward your canine may frighten her, even if he is just trying to say hello — a dog who is straining forward can look unfriendly and aggressive. If the other dog holds his tail up in an erect, stiff wag, this tail carriage may be perceived by your dog as a sign of aggression and is likely to cause a negative reaction. Direct eye contact can also be intimidating; a dog who stares at your dog as he approaches may elicit a stronger response from your dog than a canine who frequently glances away.